The Rockport Miracles-Part 4: Episode 12: The Ballad Of Derecho Dan Continues 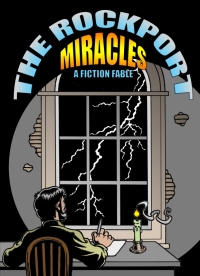 Maynard Gridley guzzled down another 8 oz. bottle of Coca-Cola and followed it up with a belch that could wake the dead. As Little Dan and the three Joes sat in rapt attention inside the Gas & Lube, Maynard told a story he’d brought home from Vietnam, along with his scars, his mental wounds, and a souvenir silk jacket embroidered with the words, “I’ve Served My Time In Hell-Vietnam.”

They were interrupted when Little Dan’s neighbor, Rosalie Fry, banged on the locked door of the gas station. She’d been looking after Little BD ever since the tornado had destroyed Little Dan’s home and nearly killed his mother. Rosalie dropped off Little BD so she could run a few errands. The little Boston Bull had been so traumatized by the tornado that Little Dan thought it best to keep him with friends during the work day. Afraid of Maynard Gridley, Little BD took one sniff in his direction, let out a frightened yelp, and ran off to hide in the Tire Corral. Maynard just shrugged and yanked the pack of Lucky’s from his rolled up shirt sleeve, lit one up, and continued his story:

“Monsoon Charlie was knocking on heaven’s door. The little stream that ran through our firebase was now a river with a strong current that rushed down the middle of the valley. When the VC and NVA sensed we were up to something, they’d moved their snipers closer to the firebase to take pot-shots at us.”

“Our Lieutenant was a college boy who knew all about some guy named Tesla. He said that Tesla invented a way to stop a storm in its tracks with a well-timed explosion. We'd never heard of Tesla, but we were still Yanks and sure knew something about blowing things up. It was our only chance to stop the storm before it wiped us off the face of the earth.”

“The Lieutenant ordered the sappers to load all one hundred 75mm howitzer shells into the hole with a daisy chain of Claymore mines strapped onto each shell. A single detonator would set off the massive explosion from our “safe” position behind the sandbags in the far right corner of the firebase. Meanwhile, the men who’d been ordered to inflate all three hundred of General Westmoreland’s hemorrhoid cushions had returned with the wildest looking think I’d ever seen.”

“The inflated butt cushions had been strapped together in packs of three and tied together in one long ribbon like a ceremonial Chinese dragon. The Lieutenant ordered us to line up behind the sandbags like paratroopers and hang on to our hemorrhoid cushions “like they were our mothers and girlfriends.” I was at the end of the line and named my cushions “Mary Jane” after Mary Jane Skalski, a girl I loved in high school. By then, the enemy snipers were shooting through the monsoon rains at our three sappers as they fled the hole full of rigged explosives. Two sappers had made it back unharmed. When the third sapper tried to leave the hole with the detonator cord, a sniper shot him in the chest and he fell back into the hole. Without that detonator cord we were jungle spam. Something had to be done.”

Maynard’s face turned pale. “I pulled out my combat knife and detached ‘Mary Jane' and a companion section from the butt-cushion ribbon. Holding them in each arm, I darted out from behind the sandbags. As soon as I entered the kill zone, my comrades sprayed eccentric rifle fire on each hillside in hopes of pinning down the invisible snipers. By the time I reached the hole, I’d been hit three times, in my leg, my butt, and one in the helmet that permanently parted my hair. I was staggered but able to dive into that hole. I landed on top of the wounded sapper who was still alive and gasping for air. The hole was filling up fast with water.”

“I took the end of the detonator cord and tied it tight around a baseball sized rock and flung it, as hard as I could, toward the sandbags. It hit the Lieutenant in the face and broke his nose! ‘Good throw, soldier!’ he yelled back. ”Everyone shouted at me to return to the sandbags but I knew that I couldn’t. The snipers would’ve picked me off in a heartbeat. Besides, there was no way I would let that sapper be blown to bits.”

“By then, Monsoon Charlie was in our driveway. The sky above us was black as India ink and made terrific noises like steel being ripped in two. I waited until the hole filled up and became one with the river. When it did, I put my arm through “Mary Jane” and strapped the second section to my wounded comrade. ‘GIVE IT A NAME!!” I yelled. 'Peggy Sue!' he uttered weakly, as frothy blood gurgled from his mouth. I yelled out, 'BUDDY HOLLY FOREVER!' right before the river currents sent us rafting down the valley. We floated away singing, ‘That’ll Be The Day,’ like the good American boys we were.”

“The Lieutenant watched through his binoculars as we disappeared from view. With the detonator cord securely attached and Monsoon Charlie directly over his position, the Lieutenant ordered everyone to bend over and grab their hemorrhoid cushions. Then he screamed: ‘FIRE IN THE HOLE!!!’”

*The wind and rain brought in the dark

While our weather bomb awaited a spark

We hit that switch and blew the hatch