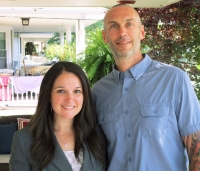 The union which represents nearly half the City of Lakewood’s employees has endorsed Meghan F. George for mayor.

The American Federation of State, County and Municipal Employees (AFSCME) represents more than 150 public works and administrative employees in Lakewood.

Local 1043 President Mike Satink, who works for the streets department, says that, “Councilwoman George respects the hard work we do every day. All residents of the city can expect that same respect from their mayor, with her leadership.”

Satink says that straightforward, honest respect is the main object of workers he represents in Lakewood’s streets, refuse, building and other departments. “Respect for fairly bargained contracts, and respect for people,” he says.

A Lakewood employee for 12 years, Satink says that he has gotten to know George very well during her time on city council, and that she has impressed him with her interest in the details of city services and the people who keep them running.

“We have been meeting with any and all candidates” in this year’s local elections, Satink says, but George distinguished herself through months of dialogue about ways the union can help improve local services in the years ahead.

“She’s here for life and loves the city of Lakewood,” Satink says of Meghan George. “In my opinion, Meghan is the right person to lead this diverse city.”

George says she is especially grateful for the endorsement from local city workers.