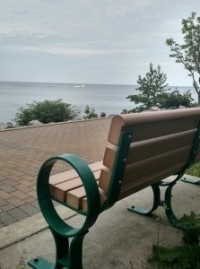 The July 4, 1969 Memorial Bench looks out across the lake.

The idea for the memorial bench started exactly five years ago. I was in Lakewood on business. I stopped for lunch at the downtown restaurant Souper Market and picked up a Lakewood Observer.

I was very moved by the article Lakewood resident Gary Rice had written for the 45th anniversary of the storm. He had graduated with my sister the month before the storm. He wrote that her passing had inspired him to take her declared college major in education as his own.

I finished the article and my lunch, and did something I never thought I would do again. I drove down Belle Ave and entered Lakewood Park.

The bandstand seemed to be the only structure that was remotely the same. I had been told this is where my sister was killed by falling trees. I had been there that day, but was with a girlfriend taking refuge in a home nearby. As I drew closer, I saw hundreds of memorial plaques on benches, and sidewalk bricks. I spent a good bit of time looking for one that remembered the historic storm of July 4, 1969 but found nothing.

My next stop was City Hall where I left a note for my former classmate and the current mayor, Mike Summers, asking how to purchase a memorial bench for my sister. Mike caught up with me a week later and told me that after talking to other members of the class reunion committee, the decision had been made to have the class donate the funds. In the summer of '69, our class had just graduated from the three junior highs and was entering Lakewood High in the fall. Obviously, the event was seared in everyone’s memory, although I was the only classmate who lost a sibling.

The project was spearheaded by our homecoming queen and reunion chair, Anita Weber Rhea. The website and donation apparatus was put together by class brainiac Ellen McFarland Matheny and the email blast resulted in our collecting the $1200 needed within a two day period. I wrote all the thank-you notes.

The bench was completed and installed the following summer, just in time for our annual class picnic held in Lakewood Pavilion. At some point, everyone present walked down to the new lakefront promenade and viewed the bench, which is closest to the Solstice Steps.

Everyone present felt proud that our class was the one to commemorate this event.

For me, the park suddenly came alive again. Instead of a foreboding place of sadness, I now saw all the wonderful improvements and smiled at all the families enjoying this wonderful park with their loved ones. At least once a year, I visit and sit on the bench.

It’s all good. My sister is remembered.