Tradition Amid Change: The Story Of Cleveland 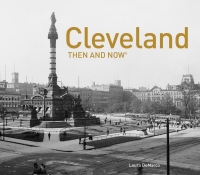 As a hometown, Cleveland holds a special place in residents’ hearts. They love to talk about the city’s history and their own memories of it. Author Laura DeMarco tapped into that nostalgia with her first book, “Lost Cleveland,” in 2017. Now she’s back with “Cleveland Then and Now,” which matches historic images of Cleveland landmarks with contemporary color photos of the same scenes.

You can meet DeMarco on Thursday, May 23, 2019 at 7:00 p.m. in the Main Library Auditorium to see and hear images and stories of historic and contemporary Cleveland.

Located in a prime location for industrial success, Cleveland prospered in the nineteenth and twentieth centuries, with both great wealth and the inevitable pollution and poverty that follow industrialization. By the early 1900s, the prosperity generated from the steel mills, factories and railroads resulted in a number of substantial civic and commercial buildings, monuments, bridges and mansions. By the 1920s, Cleveland was America’s fifth largest city, with almost a million people. When the city started to falter in the 1960s, buildings were left to molder and people began to leave. Many of the city’s landmarks remained.

“Cleveland Then and Now” explores those landmarks with 150 photos on 144 pages. DeMarco describes each scene, detailing the history and development of each landmark over time. She worked with photographer Karl Mondon, who examined the historical photographs and attempted to recreate the same scene, from the same angle and time of day. Each pair of photos reveals fascinating differences or similarities.

Join DeMarco at the Lakewood Main Library on May 23, 2019 for a look at the past and present. Books will be available for sale and signing at the event.