The Rockport Miracles-Part 4: Episode 9: The Ballad of Derecho Dan Continues 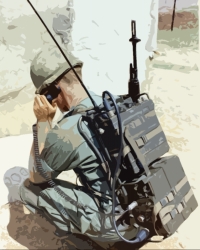 (An editor’s note:For the first time since the storm era had begun, River City finally suffered collateral damage from what was known as “Storm 5.4.” An errant tornado had spun off the sentinal winds and landed on the River City Yacht Club. Several rich people’s precious boats were reduced to matchsticks and floating wine bottles. The jerkwad mayor of River City is demanding that Rockport pay for the damages. Such is the sad madness of these times we live in.)

Maynard Gridley’s face turned pale after Little Dan had innocently inquired about “Monsoon Charlie.” After all, it was Maynard who’d brought it up while bragging that the storms bedeviling Rockport weren’t a match for the monsoons that he’d experienced in Vietnam. “Your face just turned gray,” observed Little Dan, “Who the heck was Monsoon Charlie?” Maynard plopped his half-smoked Lucky Strike into a half-drunk bottle of Coke and replied, “Monsoon Charlie was neither man nor beast!"

Suddenly, Maynard turned white, grabbed his chest, and ran into the men’s room. Through the door Little Dan could hear him throwing up. Maynard reappeared a few minutes later complaining the lunchtime eggplant parmesan brought in by the Three Joes had made him nauseous. “That ‘Guido food’ made me sick,” he griped. Little Dan didn’t believe it and the Three Joes didn’t either. It was obvious that ‘Monsoon Charlie’ still rattled the leather-tough Maynard to his core.

Fortunately, for Little Dan’s sake, the Vietnam War had just ended during the prior year. Little Dan had pumped gas for dozens of Vietnam Vets and many seemed like haunted houses to him. Apparently, ‘Monsoon Charlie’ was the ghost that haunted the house of Maynard Gridley:

*A monster comes on the morrow,

A storm too mean to tame,

A legend carved from death and sorrow

‘Monsoon Charlie’ was its name.

“We got our orders,” Maynard began, “They told us to hit the jungle and reconnoiter with a remote firebase about a mile from the North ‘Nam border. It was in some damn valley called “La Trang” or “Da Nang” or “Ba Bang”…we could never keep those damn names straight! We just called it the ‘Poontang Valley’ because that was something we all could remember!”

He continued, “All radio contact with the firebase had been lost.” (Maynard paused from his story and finished off the half-drunk bottle of Coca-Cola, forgetting that he drowned out a cigarette in it. He swallowed it down, cigarette and all, without flinching!)

“We made eye contact with the base from the edge of the jungle and tried to radio them without success. A signal flare went up to let them know we were coming in. We could see those boys waving their arms and jumping up and down. I thought they were just happy to see us. They were actually trying to warn us! As soon as we entered the clearing, enemy mortar and small arms fire started raining down from both sides of the valley. We sprinted across that open field while the boys in the firebase provided cover. We all made it but not before a couple guys sustained minor wounds. I took a small piece of shrapnel in my ass. No big deal.”

“Once there, our lieutenant wanted answers. Where is the base commander? What happened to the radio? It turned out that both had been blown up and were dead. The lieutenant grabbed the good radio and called in our status to the CP. ‘We got VC pissing on the hillsides that flank us!’ he screamed into the microphone, 'we need airstrikes on both sides of this valley!' I could hear the chatter crackling over the radio. Then I heard a voice reply, 'NO CAN DO!'

“They said that all planes were grounded because of an approaching monsoon…and, not just any monsoon. They said ‘Monsoon Charlie’ was coming right at us!”

“We all looked at each other and wondered aloud, “Who in hell is ‘Monsoon Charlie?” My squad leader chimed, “I know about ‘Monsoon Charlie’.” He’d heard all about it from an army meteorologist he was getting drunk with in Saigon. “If it’s true,” he added, “we all better start praying.”

“The guy told him that of all the monsoons that hit Vietnam each year, there was one that everyone feared the most. A Frankenstein storm that Mother Nature creates from thrown away parts of all the world’s worst storms. It comes along every 10 years or so but, it had been 15 YEARS since the last time Monsoon Charlie had come to Vietnam. It had killed 20,000 people and turned the little creek running through the middle of the firebase into the Colorado River. The lieutenant yelled into the radio asking for orders to evacuate. Instead, he was told to hold his position “at all costs.”

‘We haven’t got the high ground!’ he screamed back. ‘What are we supposed to do…SWIM OUT OF HERE?!' Then, the guy on the radio said, ‘God Be With You’…and that was that! From then on, we were on our own.”

“Just then, I felt that first drop of water land on my face…the rain was starting.”

*HUNKER DOWN! The radio said,

Take the high ground or you’ll be dead!

Chances are you won’t last the day

‘Cuz ‘Monsoon Charlie’ is on its way!