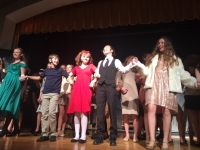 The cast of "Annie Junior" take a bow.

This past weekend Harding Middle School put on a production of "Annie Junior" to a standing room only crowd.

Many of the key players were 8th graders taking the stage for the last time after putting three years of hard work into Harding's Drama Club which took on the well-known show and did not disappoint, transforming Harding's cafetorium into Miss Hannigan's orphanage, Oliver Warbuck's mansion and the bustling streets of New York City, which came alive with Rockette-like dancers, a star-to-be right off the bus with her suitcase and a gang of New Yorkers, singing and yelling.

Julia Kompier, as Annie, was spot-on as the tough little girl with the heartbreaking note in her pocket and the soaring voice. Madeleine Rybak was hilarious as the harried and unscrupulous Miss Hannigan delighting the audience with her performance of "Little Girls." The orphans, led by Molly, played with much mischief by Jana Evans, made for a high-spirited Hard Knock Life, laughing and fighting and coming together for some impressive singing and dancing.

Seventh grader Emily Jarecke was convincing as Oliver Warbucks, magnanimous and charmingly smitten with his new charge; when he thinks he has to say goodbye to Annie he really made you feel it. Ava Bruening in the role of Grace Farrell, brought sophistication to the Warbucks household, gently and skillfully keeping everyone on schedule. Sixth grader Lucas Marvin and 7th grader Cameron Wereb as Mrs. Hannigan's shady brother Rooster and his paramour Lily St. Regis were capably sinister and also very funny as Annie's fraudulent parents.

When Annie goes on The Oxydent Hour of Smiles radio program, the interplay between Warbucks, who, struck with stage-fright, shouts his radio-scripted lines and the golden-toned completely relaxed radio host Bert Healy as played by Rocco Crino was one of the highlights of the show.

Many of these gifted actor/singer/dancers and crew will graduate come June, but there are many talented sixth and seventh graders coming up to take their places.

The Advisor/Director for the show was Ms. Grace Hackett and the Advisor/Choreographer was Mrs. Emily Marvin. They received much assistance, as they explained before the show, from 8th grade student directors Lydia Kress, vocal, Laren Nix, choreography, and all around assistant, Meredith Wheeler.