The Rockport Miracles Part 3: Episode 4 : "Strangers In The Night" 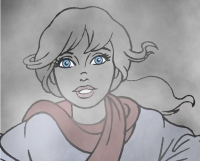 Because I’m genetically insecure, I wasn’t confident that Wren Mathews would be happy to see me. I had ascended the bell tower stairs at St. Swithun Church with reasonable certainty of a warm greeting. And yet in the “here today, gone goose” world of teen-aged love, nothing is certain.

As it turned out, Wren WAS happy to see me and why shouldn’t she be? We’d lived a lifetime together in less than a day and now we’d found ourselves unchaperoned and surrounded by dense fog! Good ol’ Father Marlowe was a hopeless romantic. It was he that suggested I meet Wren in the bell tower. Unfortunately, his own momentous meeting downtown had not gone well.

During a confrontation with the Bishop (his real life younger brother), Marlowe learned that he’d lost his beloved job of 30 years as Pastor of St. Swithun. Adding insult to injury, he was informed that Father Elmo Fry, the most notorious pedophile in the growing society of disgraced Catholic clergymen, would be provided indefinite sanctuary at St. Swithun by order of the Holy See.

Father Fry had just returned to the U.S.A. via hospital ship from a remote jungle parish on the island of Haiti. While there, he’d been cruelly injured (some said mutilated) by a Mambo priestess for having molested several boys in the village where he lived. When told of these plans, Father Marlowe went bonkers. He broke the Bishop’s nose and had to be dragged away by three seminarians. Marlowe screamed that if Fry took one step onto the grounds of St. Swithun, he’d “send him to hell, where he belongs.”

As a direct result of his actions and threats, the Bishop issued a severe retaliatory punishment. He ordered the new pastor, Father St. Charles, to remove Father Marlowe from the priest’s residence and banish him to a “no tell” motel on the outskirts of Rockport. Father Fry, on the other hand, was to be made comfortable inside the St. Swithun convent, whose only permanent inhabitant was the primeval, harridan nun known as Sister Mary Leviticus.

Meanwhile, Wren and I were blissfully waiting out the fog up in the bell tower. I had a million questions to ask her but the love looks in her big blue eyes made me speechless. I was on the verge of kissing her when a strange noise on the stairway ruined the moment. “Ker-clunk!...Ker-clunk!...Ker-clunk!” We stood up and peeked down the darkened stairwell to see where the sounds were coming from.

Suddenly, we both felt overtaken by a tingling feeling caused by another strange warm wind. “Oh no,” I said to Wren, “It’s the ill wind.” This startled Wren because she’d slept through the earlier event that caused hundreds of us Rockporters to become temporarily psychotic. I grabbed Wren’s hand and said, “We’ve got to get out of this wind right away!” We were about to run down the stairs when the source of the “ker-clunk” sounds came into view. It was old Sister Mary Leviticus laboring mightily to pull a tall, heavy object up the stairs one “ker-clunk” at a time.

Wren and I ducked out of sight behind a large cabinet. The Sister reached the bell tower and with one last feat of strength, she lifted the mysterious object onto the platform. To our amazement, it was a life-sized wooden statue of Jesus! She was obviously under the spell of the ill wind! As we hid undetected, she waddled over to the cabinet which held the button panel controlling the “canned bells” that had replaced the real church bells years ago.

The pre-programmed bell tones included many selections from the Catholic Church’s Greatest Hits catalog. The manufacturer also threw in a few secular ditties like, “Ol' Man River” and “Jimmy Crack Corn.” We could hear the Sister wheezing loudly and talking to herself as she pushed a series of buttons on the device's control panel.

Still unaware of our presence, she lurched back to the statue of Jesus and started pinching His face. “I bet you know how to show a girl a good time,” she said in her best Almira Gulch-like voice. At that moment, the canned bells started playing the tune that she’d selected. Wren and I looked at each other and started to laugh. It was “Strangers In the Night,” a song made popular by ol’ Blue Eyes himself, Frank Sinatra.

We stared in amused wonder as Sister Mary Leviticus took the lead and began slow dancing with the wooden Jesus. By this time, the ill wind had its grip on all three of us and while the twisted Sister rumba’d with the Messiah, Wren and I put our arms around each other and began slow dancing cheek to cheek. It was completely weird and totally wonderful.

Just as the song ended, we heard people screaming and dogs barking on the streets below. The fog was so thick, the human chaos was only heard but not seen. Then, the familiar voice of someone banging on the locked doors of the church rang out. “LET ME IN!! OPEN THESE DOORS!!” I knew that voice! I’d just spent most of the morning with it in a camera store. It was Lester Brown! Wren immediately darted down the stairs to help him.

“SOMEONE IS ON THE WAY, LESTER,” I yelled back, “WHAT’S GOING ON DOWN THERE??” Lester replied tersely, “I NEED TO SPEAK TO FATHER MARLOWE!”

Just then, Wren opened the doors and Lester Brown pushed his way into the church. Sister Mary Leviticus was still dancing with Jesus as I flew down the stairs. The fog was beginning to lift and I saw the madness playing out on the streets. People were fighting and rioting, dogs were barking and biting, others were singing, dancing and screaming song requests to the lucky gal dancing with Jesus in the bell tower. One guy wanted to hear “This Girl Is A Woman Now” by Gary Puckett and the Union Gap.

“Father Marlowe called me, he needs our help,” said Lester, “he’s been banished from St. Swithun.” Lester led us to a hidden door behind the church altar. Ever notice that the Catholics always seem to have secret doors and tunnels in their churches? I suppose it’s a tactic they developed during the days when Romans would feed them to wild animals. This particular secret door led to a safe room. Father Marlowe was there alone and peering out of a tiny crucifix-shaped window. "He’s here,” said Marlowe, "I can’t believe those Vatican bastards did this to us.”

We looked through the window and saw an ambulance parked outside the convent. Two male orderlies were helping a bald, short and rather stout man into a waiting wheelchair. The man wore the all black cassock of a priest. I noticed that the wheelchair’s seat was piled high with pillows.

Lester and Father Marlowe started whispering to each other but Wren and I could hear them clearly. “So, there he is, huh?” whispered Lester to the deposed pastor. “Yep,” said Father Marlowe in a disgusted voice, “that is the notorious Father Elmo Fry.”

Father Marlowe pulled out his handkerchief and began wiping tears from his eyes. Lester put his hands on Father Marlowe’s back and shoulder and reassured him. “Trust me, Jim. The RCM will take care of you.” As he gazed through the cross shaped window Lester muttered, “…and Father Fry will regret the day he ever stepped foot into Rockport!”

Next: Part 3: Episode 5: “WHEN METEOROLOGISTS ATTACK!”

Catch up on previous episodes at: http://lakewoodobserver.com/download-issues/