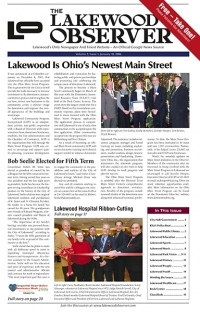 2006 - LO_2/1- Lakewood Is Ohio’s Newest Main Street - Hospital Ribbon Cutting
Headlines were all about Downtown Lakewood, Ohio. After submitting paperwork and dues, LCPI had been told that we were a “Mainstreet City.” Also was abuzz about the ribbon-cutting at Lakewood Hospital for the new Belle Avenue entrance and waiting area. Bob Seelie was elected to a 5th term as President of Lakewood Council, and continued his updates in the paper. A look at Lakewood Police’s canine Officer Obrock. A hard look at “No Child Left Behind” by Dr. Greanoff. “Young Woman’s Vision for Lakewood Park: ‘A Place To Grow’ A 4 page color spread on one of the most innovative, and cost-effective ideas ever for Lakewood Park. It was discovered the Nicholson House was actually older than Oldest Stone House! Gordon Brumm’s amazing series “Intelligent Design: Skeptical Thoughts about the Skepticism (2)” “Beauty and the Beast” and Verb Ballet covered at Beck Center. Hot Topics On The Deck: 1) First Rockport Square resident by Thomas J. George 2)Status of CitiState Program by Rhonda loje 3) The Eminent Domain Spectator by Mark Timieski

2007 - LO_3/1- City Councilman Edward FitzGerald Announces Race for Mayor
while Mayor George was being announced as the Vice Chair of the National League of Cities. Then Councilman FitzGerald grabbed the headline with his announcement that “Lakewood needed stronger Leadership.” Hogsback Lane repair announced. With the announcement of Dollar Tree coming to Lakewood we take an in-depth look at phenomenon of what it means in Lakewood. LO Photographer Ivor Karabatkovic had just won Scholastic Awards for his photos. LHS Cheerleaders collecting to send cheer to soldiers in Iraq. Lakewood Hospital Newly Renovated Cornary Care Unit examined. Gary Rice looks at Lakewood Treasure Trove of Churches. One of the most infamous cartoons in the LO ran. “Krazy Kenny and the Wrestlin Fools” by Scott MacGregor (Rockport Mircles) and Gary Dumm. Of course people were outraged, not at FB levels but upset. Kenny’s family called from Florida. They had gotten a copy of the cartoon and cried. They couldn’t believe the city of Lakewood still remembered or cared about their brother known to all as “Crazy Kenny.”

2008 - LO_4/1- “Promises That Lakewood Will Prevail”  Mayor Ed FitzGerald:
“I want a local government that is known for high ethical standards, efficiency, and technological innovation,” was one of many highlights in Ed’s speech. He would soon announce he was moving on to seek another office. We announce the loss of the historic Hall House, a turn of the century home on Detroit near Edwards Park, now a driveway for Lube Stop. A look back on 2005 including the SWAT Pigeon, The first LEAF Garden, Stand-offs, LO’s full page story in National Enquirer about Judge Pat Carroll, UFOs, Uncle Scratch’s Gospel Revival, and more! Deck

20011 - LO_7/1- Introducing Lakewood’s New Leadership-- After being elected County Executive, Ed Fitzgerald steps down handing over keys to then Councilman Summers. The two had been working with others behind the scenes to close down Lakewood Hospital originally for a Rec Center. Scott Gilman and Dave Dargay were appointed Fire Chief and Assistant Fire Chief. And stories about “Lakewood Hospital Receives Three Gold Seals of Approval,”  “Transportation Meets Public Art In Downtown Lakewood,” “Possible Salary Raises For The Mayor And Council,” “Matthew Markling To Lead Board In 2011,” “Waiting For Superman,” “H2O Starts 2011 With New Assistant Coordinator Emmie Hutchinson And MLK Day Of Service.”  The City had begun to push “Wellness” and started various programs dedicated to “Wellness” so LO started “Wellness Watch” with some good recipes and information. Lakewood Businesswomen Team Up For “La Bella Italia.”

2012 - LO_8/1- Quiet Street Disturbed By Violence
2012 Comes in with violence, handled by Lakewood Police quickly, quietly as they always do. Sad news is that past City Council President Robert Seelie has died. A look at the Hollywood Slim Band before their night at LPL. We join with LHS as they celebrate 50 years of Foreign Exchange Programs. Lakewood Native To Launch New Book, “The Irish Hungarian” Erin has been back writing for the LO many times and we love her input! LO’s “Wellness Watch” focuses on “Midwives Offer Birthing Options For Lakewood Women," and “Stress Kills.”


2015 - LO_3/1- Hospital? Clinic? Rec/Wellness? Who Knows?
“Lakewood Hospital’s Current State In Question” As we had discussed on the Deck going back to 2010. With hints provided by the LO 2011, and with the Lakewood Observer breaking the news on the LO Deck in 2014, we finally put the story on Page 1 of the Lakewood Observer. As we break the story the Hospital is closing, Lakewood City Hall says, “The LO is lying, it is not closing.”City Hall says, “Investment In Water And Sewer Projects Spurs Rate Hikes” but no mention of the $230 million needed. “St. Peter’s Youth Participate In Homeless Awareness Sleep-Out.” “Grinch Steals Christmas From Lakewood Residents” a new crime in 2018 police nab some of these thieves! “Thomas Robert Bullock IV Is Born”

2017 LO_13/1 -  Back To School In LHS’ New Academic Wing
The big news was the opening of the new Academic Wing at LHS, and the passing of ex-Superintedent “Dr. Madak Left Lasting Lakewood Legacy.” Other stories looked at: “The Art And Architecture Of Lakewood Public Library,” “Lakewood High School Duo Nominated For Presidential Scholar Program,” “Remarks From New Board of Education President Betsy Shaughnessy,” and outgoing president, Tom Einhouse. “LakewoodAlive To Host Loving Lakewood: Lumberjack Bash On February 25.” An update on “Bad Government 12: President O’Leary Delays Charity Care For Political Purposes,” and a look back on “Winterhurst Ice Skating Rink.”