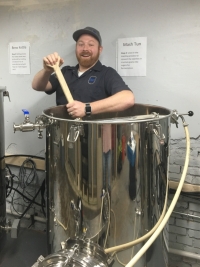 Lakewood's own Ean Fakan, is a homebrewer and an intervention specialist, an educator of children with special needs, for over a decade. Since starting to homebrew seven years ago in a kitchen on Lakeland Avenue, he has expanded his craft to beers, wines, ciders and meads. Once a hobby, Ean's Brews moved from stovetop pots to electric brew kettles and stainless-steel conical fermenters. That's how he won a competition at Bad Tom Smith Brewing Company, which earned Fakan the title of HomeBros Cleveland brew club, Brewer of the Year for 2018!

Fakan’s newest public release, the Black HI-PA, tied for second place in the 2017 Cleveland Beer Week’s Homebrew Competition, and it will be available at the W. 25th St. brewery beginning January 5, 2019. It is a beer capable of weathering the dank darkness that Cleveland is famous for in the fall, yet keeping it light and peppy enough to punch through a rogue heat wave on Lake Erie's shores. It took several years to perfect, explained Fakan. He boasts that the Black HI-PA is for either lovers or haters of both dark beers or IPAs. This is a beer you can confidently slide across the table for your dubious friend. The Black HI-PA’s balance of roasted chocolate malt and the resinous hop profile will tiptoe up your friend’s nose and down their palate until gracefully settling in their gullet. Expect your companion to reverently replace the glass on the table, so that you both may admire the HI-PA’s light body, but dark color. And should you doubt its intentions, rest comfortably upon this fact of good will: the Black HI-PA sends 40% of its proceeds to its creator’s prized charity of choice: Autism Speaks. Go ahead, take another sip, it’s for the kids!

Ean Fakan is a married new father, and Intervention Specialist who is passionate about outdoor sports, brewing beer & Lakewood!

I am a married, new father, and Intervention Specialist who is passionate about outdoor sports, brewing beer & Lakewood!