The Rockport Miracles Part 2: Episode 6 "No Quarrel With Reality" Fiction by Scott MacGregor 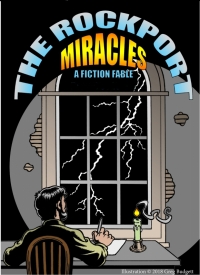 I awoke on the morning after Rockport’s night of terror to the haunting drone of a coastal foghorn. It’s a comforting, albeit melancholy sound that always reminds me of the cadence sung by the witch’s soldiers in the “Wizard of Oz.” “Bweeeee-bomp.” “Bweeeee-Bomp.”

As I wiped the sleep from my eyes, I remembered that it was still January. Why, I wondered, would a foghorn preside over a frozen Lake Erie? Who or what was it attempting to warn? I unpeeled myself like an artichoke from multiple layers of warm and cozy bed covers and staggered to my window. The fog was so thick that I couldn’t see the next-door neighbor’s house only 20 feet away. As I got dressed in front of a mirror, I was startled by all the bruises that covered me from head to toe. That’s when memories of the previous night with Wren Mathews came rushing back in vivid Technicolor. I had to see Wren as soon as possible.

I sailed down the stairs and found bad news on the landing. Mom said that Rockport schools were closed indefinitely, and the man on the radio said 14 dead (including the city’s mayor), 137 injured, and 241 homes and buildings either damaged or destroyed. A devout Catholic, Mom said that I must have had a lucky angel on my shoulder during the storm. Like any normal teenager, I let her words go through one of my ears and straight out of the other. I had no quarrel with reality at that age. Luck was not my guardian angel at age 16. I knew it was all about the choices I made, not some dumb angel. However, just in case, I flicked the invisible guardian off of my shoulder and proceeded to the breakfast nook.

I inhaled my usual half box of Cheerios in milk and headed straight to Wren’s house. Along the way I dropped off a roll of film at Rockport Camera, which was open despite not having any electricity. The roll included my copy shots of the mysterious Polaroid negative taken by Wren’s mom at the height of the storm. Lester Brown was the snobby jerk that owned the camera store. He possessed an expertise in photography that was without peer or so he would have you believe. I showed him the Polaroid negative and asked him for an opinion of the mysterious blotchy area of the picture. After a lengthy dissertation that reflected his vast knowledge and opinions of the Polaroid Corporation, he finally looked at the negative with his handy array of magnifiers and other optical gizmos. He muttered “Hmmmmm,” following each look with a different tool. At last, he gave out a conclusive “Hmmmph!” I assumed this meant an answer was forthcoming and I was right. “Looks like a snow angel,” he said matter-of-factly. I politely thanked him for his opinion and whispered cynically, “snow angel, my ass,” as I walked toward the door. “I heard that,” he said with an evil eye. He uttered a final “Hmmmph!” as I left the store.

The fog was beginning to lift as I approached Wren’s street. The sounds of chain saws and other heavy tools and equipment filled the air as residents endeavored to repair their damaged homes and clear their properties of fallen trees. At this juncture, I would like to note that Rockport is mostly comprised of densely packed neighborhoods. Each street is a village unto itself and in each of these “villages” live good neighbors, bad neighbors, busy bodies and self appointed street mayors. From a distance, I could see something wasn’t right. Police cars, two of them, were parked on Wren’s front lawn. When I had left the night before, her house was in perfect condition. In fact, it was the only house on her street that hadn’t been damaged. Now, every window in the house had been broken and the roof had fire damage.

Two cops were guarding the house. I walked up to one of them and asked, “What happened to the people who live here--are they OK?” “Nothing to see here--keep moving,” he replied. I exclaimed, “But, I’m a relative! I’m a nephew and… a cousin!” The cop said that Wren and her mother were unhurt, but had to be moved to a different location "for their own safety." I asked again what happened but they refused to tell me. Suddenly, a strange light wind, neither warm nor cold, came out of the north and coated me a with feeling of static electricity. My mood instantly shifted from fear to anger for no apparent reason.

Uncharacteristically, I jumped right up into the cop’s face and demanded that he tell me where Wren and her mother had been taken. I startled him to such a degree that he pulled out his night stick and was about to club me with it when the radios of both patrol cars crackled with multiple calls for help. The cops jumped into their vehicles and sped off in two directions and that’s when I saw it. There in the snow, hidden by the patrol cars on Wren’s front lawn, was…a snow angel. I dropped to my knees for a closer look and surmised that it had been made by an older child. The snow within the angel had melted right down to the grass which had been singed brown.

Then, a gurgly voice from behind me said, “I told ya something wasn’t right about that house…hawwgg!” I turned around and there stood Wren’s kooky coughing neighbor leaning against his decrepit Chevy Nova station wagon. “WHAT DID YOU DO?” I screamed. “Wellll sonny boy, let’s just say that after you left last night, me and a few others in the neighborhood did a little home remodeling. It jes’ didn’t seem right that our houses were beat up by the storm and theirs was perfect.” As he turned to dispatch some phlegm, other men from the neighborhood surrounded me. “He’s a friend of these people,” shouted the Chevy Novanite. Someone else yelled, “We don’t want people like you in Rockport.” Emboldened by the mob, the kooky cougher started to push me around. That’s when I ripped the radio antenna off of his Chevy Nova (not a feat of strength since it was hanging on by a hunk of duct tape). I started to whip him with the antenna when four other guys converged and forced me to retreat through a dozen backyards on three different streets. I eventually eluded them but not before someone’s Pomeranian bit me on the leg.

The strange ill wind out of the north eased up and I felt like myself again. On the way home I dropped into Rockport Camera to give Lester Brown an apology for rudely dismissing his correct guess of a snow angel on the Polaroid negative. As I entered his darkened store I saw an entire roll of unprocessed 35mm film that had been pulled out of its canister and draped over a Kodak ad placard. Looking all around I saw many different sizes of unrolled film hanging off of chairs, ceiling fans and lights. I heard a noise and peeked over the counter. Lester Brown was sitting upright on the floor with a roll of film in his hands. “Mr. Brown! Are you OK?” I asked. He raised his head with a sozzled look in his eyes and pulled the unprocessed film straight out of its protective canister. “Nope,” is all he said.

Fearing that he’d been robbed, I ran out of the store onto Detroit Avenue with hopes of haling down a police car. Once outside I felt a warmish wind that brought back memories of the night before. Then, a sight in the northern skies caused me to barf up my Cheerios. Pitch black clouds with purple lightning were moving rapidly across Lake Erie and coming our way. Another fierce storm was about to hit Rockport, this time in broad daylight.

Catch up on previous episodes at: http://lakewoodobserver.com/download-issues/