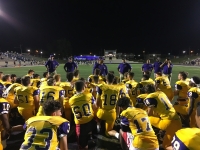 Coach Thome speaks to the team after the loss.

The LHS football team opened the 2018 season on beautiful Friday night at First Federal Stadium.  A festive crowd enjoyed the late summer weather, which was warm with a nice breeze. The student section wore a festive "beach" theme, and the marching band had a great program of Broadway songs. However, Garfield Heights spoiled the party with 42-0 win over the Rangers.

The Bulldogs defense, led by University of Minnesota recruit  Donald Willis, lived up to its strong reputation by holding the Rangers scoreless in the game. They set the tone early, intercepting a Ranger pass on the second play from scrimmage. Senior Isaiah Jackson caught a deflected ball and returned it for a Bulldog touchdown in the first minute of play. Senior kicker Yousef Jebrin made the PAT to give Garfield a 7-0 lead. Lakewood punted on its next possession, and the Bulldogs took over the ball in Ranger territory. The Lakewood defense forced a fumble on the Bulldogs third offensive play, regaining possession and stopping the Garfield drive.

Garfield eventually regained the ball and stretched the lead to 14-0 on a ten yard touchdown run by Jackson, who plays both running back and defensive back. After another “three and out” possession by the Rangers, Garfield drove for another touchdown to make the score 21-0 at the end of the first quarter. The third touchdown came on a pass play from senior Marlon Jordan to Willis (who plays both wide receiver and linebacker).  Two more touchdown runs, one each by seniors Ty’Riek Smith and Jovante Wimbley, made it 35-0 at the half.

The OHSAA “running clock” rule was in effect during the second half. Junior Tahshun Allen scored on the Bulldogs first drive of the second half, making it 42-0 midway through the third quarter. Lakewood put together its best drive in the fourth quarter, moving the ball 57 yards before turning the ball over on downs. Senior DJ Jackson, a workhorse back throughout the evening, had nice 11 yard run on the drive. Freshman tight end Tico Jones had his first career reception on the drive, catching a pass from junior quarterback Albert Wilhelmy.

Coach Thome was disappointed with the game’s result, but pleased with his team’s effort. “We kept playing hard” he said after the game, “You can’t correct effort”.  He believes the Rangers will improve as they gain experience. Lakewood’s next game will be Friday night at Amherst against the Comets. Amherst won its opening game 33-0 on Friday night over Clearview. The Rangers’ next home game will be Friday, September 15 at First Federal Lakewood Stadium. Kickoff is scheduled for 7pm.