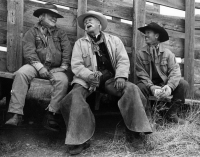 A picture that Lakewood resident Bob Soltys took last fall at a Wyoming ranch was recognized as Best of Show at the 'Spirit of Wyoming' juried exhibit at the Sage Community Art Gallery in Sheridan, Wyoming.

The juror, professional photographer Shawn Parker, described the photo,'Three Amigos,' as follows: "This photograph could have been taken yesterday, or it could have been taken 50 years ago - the only clues that date it are the cup in the cowboy's hand on the right, and the modern-looking brace on the foot of the cowboy on the left. The Wyoming experience is often a timeless one, and I think this image reflects that. These gentlemen have been hard at work at something, but they still find time for levity - at least that's the way I choose to read it. The black and white strips away the potential for distractions and allows the viewer an opportunity to at least imagine they’re in on the joke."

Bob took the photo during a lunch break during fellow photographer Adam Jahiel's 'Willow Creek Ranch' workshop in Kaycee, Wyoming last September. Long a fan of the West's peaceful wide open spaces, Bob attended the workshop as part of his recovery from the death of his longtime friend and companion, Lucky, the Jack Russell Terrier. He said the Three Amigos - cowboys Clint and Mike, and ranch owner Barry Cragin - have worked together for years and bantered back and forth quite a bit. "I was so busy making pictures that I don't remember what the joke was," Bob said.

An artist's proof of Three Amigos, and of 'Wyoming Traffic Jam,' are on display at John Rehner Fine Art and Framing in Lakewood. Bob's other photos of Willow Creek Ranch, the 103rd OVI, Paris, and his friend Manny the Jack Russell Terrier are online at www.bobsoltys.net.

Bob Soltys is a photographer and former Navy officer.

Bob Soltys is a photographer and former Navy officer.