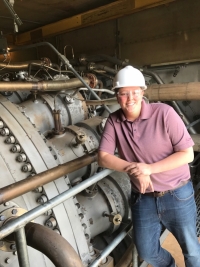 Lakewood's Mattie Liston poses next to a gas turbine. Mattie has spent considerable time assisting at one of GE's Power division facilities in Greenville, SC.

The last time I wrote about my oldest daughter Madelyn Liston ("Mattie") in these pages, she was 18 years old and had just signed a National Letter of Intent to accept an athletic scholarship at Ohio University. That was over eight years ago. She subsequently spent four years as the net-minder for the OU’s Women’s Soccer squad, then graduated and began her career.

This time I’ll skip the part about how Mattie smashed every meaningful goalkeeping record at OU, and how those GK records may never be broken. You can look it up. And I’ll skip the part about how she also earned a B.S. degree from OU’s Engineering Technology and Management program. And how Mattie began her career in GE’s Operations Management Leadership Program (OMLP) a little over three years ago. And how she quickly became a shooting star and protégé for one of GE’s top “lean manufacturing” gurus, and travels the country and beyond.

No, instead I’m writing only about Mattie’s most recent accolade. Last March 8th, International Women’s Day, Mattie was the recipient of one of only eight awards bestowed by GE -- the annual “Stay Lean to Go Fast!” award. This is no mere participation ribbon. Tens of thousands of GE women corporate-wide were eligible for this honor. It’s the real deal, and GE had this to say….

“Mattie recently embraced a challenging new role in the pilot for a Lean Training program. She weathered changes in both the scope of her work and location of the role over the past six months (the role was originally with GE Corporate and has switched to Power). She is acting as a support for the US executive lean leaders and does a tremendous amount of groundwork to ensure lean and VSM events run smoothly. Her work ensures that sites can utilize lean resource efficiently and helps guide teams to reach aggressive lean targets of 50% inventory and 50% lead time reductions. Mattie exemplifies what it means to stay lean to go fast and applying her new skills to benefit multiple GE Power sites and Lean leaders.”

GE waded through over 500 nominations before honoring Mattie with this award. The award was announced and promoted corporate-wide, and of course within Mattie “home” division – Current by GE – which added….

“A very special shout out and congratulations to Current’s own Mattie Liston for receiving the award for the GE belief, "Stay Lean to Go Fast!" She received this award for embracing her challenging new role in the pilot for a Lean Training program and applying those new skills to benefit multiple sites and Lean leaders.”

It would appear that Mattie has a VERY promising career in front of her. As manufacturing (hopefully) begins to enjoy a renaissance in this country, we’re going to need many more people with Mattie’s special skills, steady presence and solid work ethic. Plus where better to learn the ins, outs, ups and downs of corporate life than GE.

Timothy Liston and his lovely wife Dawn have lived in Lakewood for almost 33 years. They are the proud parents of two talented daughters.

Timothy Liston and his lovely wife Dawn have lived in Lakewood for almost 33 years. They are the proud parents of two talented daughters.