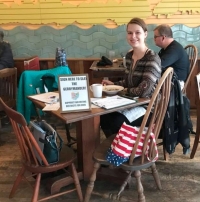 After a half-century of effort, Ohio has the chance to kick gerrymandering out of our state for good—and Lakewood has played an important part.

On May 8 we can pass Issue 1 to reform the system for drawing congressional districts, and stop partisan abuse of redistricting.

Drawing biased “gerrymandered” districts, named for the early Massachussetts Governor Elbridge Gerry, dates back to the United States’ earliest days. But the impact of gerrymandering has grown extreme in the 21st century, as mapping software and big data have allowed a party in power to pack more of the minority party’s voters into ever fewer districts.

Against this backdrop, reform efforts in Ohio have found a new urgency. Following decades of attempts by the League of Women Voters and other good-government advocates, Ohio approved a ballot measure to change statehouse-district rules in 2015.

The League took encouragement from voters’ overwhelming approval of that measure, and began calling for similar reform to congressional redistricting. Yet the statehouse’s Republican leadership, which had supported the 2015 reform, argued for delaying any further action.

When a Fair Districts petition drive collected more than 200,000 signatures entirely through volunteer effort, statehouse leadership had second thoughts. A combination of grassroots pressure and persistence within the legislature then produced a genuine, bipartisan agreement on Issue 1.

In both cases Lakewood has contributed. Early in the petition drive, one Fair Districts volunteer said unofficially that “Lakewood is basically carrying Cuyahoga County on this.”

The bipartisan agreement which resulted will end the old, anything-goes potential for partisan gerrymandering. Starting after the 2020 census, new maps will require substantial support from minority-party legislators.

Issue 1 includes additional positive reforms as well. It will add transparency to the process. It will sharply reduce the silly-string districts like our own, which extends all the way from Lakewood to Toledo. It will, ultimately, make government more accountable to voters.

Everyone in Lakewood who signed petitions or helped circulate them shares in the credit for getting this far. The long campaign for fair districts in Ohio can end in success—if Issue 1 passes.

Please help make sure it does! Vote Yes on Issue 1 in the primary election this May 8.