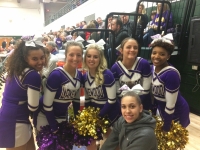 The season came to an end for the Ranger boys basketball team and the LHS cheerleaders, who were there for all 22 wins in this championship year.

St. Edward defeated Lakewood 59-45 Wednesday night in an OHSAA district semifinal game held at Strongsville High School. The victory moves the Eagles into Saturday's district championship game, which will be held at the CSU Wolstein Center at 7pm. It also ends a historic season for Lakewood, which won the Southwestern Conference Championship and entered this game riding a 19 game winning streak.

Ranger senior Jacob Sala opened the scoring with a pair of free throws 35 seconds into the game to put Lakewood up 2-0. The Eagles then went on a nine point run to take a 9-2 midway through the first quarter. The lead was 18-9 at the end of the period, as St. Edward used a press defense to disrupt the Rangers. "They turned us over a bunch of times in the first half," Ranger head coach Alex Cammock said after the game. "We haven't seen pressure like that since the first game." That first game was the season opener against St. Edward at LHS. The Rangers were further hampered Wednesday night by foul trouble, as junior Tim Smith picked up three fouls midway through the period. Lakewood was already without junior Zion Kolodynski-Darby, who missed the game due to injury.

Eagle sophomore Montorie Foster opened the second quarter with a five point scoring spree, stretching the lead to 23-9. He would score four more points midway through the quarter, making the score 29-11 with 4:36 remaining in the first half. The game was on the verge of becoming a blowout, but the Rangers were able to outscore St. Edward 7-4 before the half, cutting the lead to 33-18 at the break.

Ranger senior Liam Doup opened the second half scoring with a three pointer in the opening minute, energizing the Ranger crowd and cutting the lead to 12. Eagle sophomore Grant Huffman responded, hitting a pair of baskets to stretch the lead to 17 early in the third quarter. Smith, who returned to the game after sitting out much of the first half with foul trouble, scored five points in the third quarter to lead the Rangers. However, each time they cut into the lead, the Eagles would respond. Junior Meechie Terry and senior Michael Dowell each hit key three pointers in the period that kept the lead in double digits. The Eagles led 46-30 at the end of the third quarter.

Senior Jabrell Boyd hit a runner early in the fourth quarter, and Diop hit another three pointer to make the score 48-35 with over five minutes remaining. Huffman responded with a three pointer for the Eagles at the 4:14 mark that dampened the Rangers comeback hopes. The teams played evenly for the next few minutes, with St. Edward maintaining a lead of around 15. Both teams emptied their benches in the final minute. Ranger fans gave a tremendous ovation to the senior class, particularly Jacob Sala. Sala, the team's leading scorer this season, will study and play basketball at Notre Dame College next season.

In his post game comments, Eagle head coach Eric Flannery credited the Rangers for slowing the pace of the game. "We wanted to play fast, they wanted to play slow" he said. He also commended the Rangers man-to-man defensive schemes early in the game, which helped the Rangers to force nine first half turnovers. Flannery and the Eagles, who look like a strong contender for the state title, will play for the district championship on Saturday against the winner of Thursday night's St. Ignatius/Medina game at Strongsville High School.

After the game, Cammock praised his entire senior class. "They are seven leaders that came together as a team," he said. "They deserve all the good that has come to them." Cammock's squad had a tremendous season, christening the new LHS gym with a 22-3 record and a conference championship. In the words of Coach Cammock, "What a fantastic frickin' year!"