It Was Only A Dream 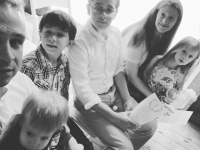 I had a dream the other night. Generally speaking, I find it hard to remember most of the dreams that I dream, but this one was different. This dream was the kind that stays with you long after the day has come and gone again.

This was my dream:

I was walking back to my car in the middle of some parking lot with three of my kids in tow.  I had my arms filled with bags full of goods acquired (on sale no doubt), from yet another “successful” shopping excursion. In addition to the overloaded bags, my arms were privileged to be juggling my toddler (who hates to walk) and my two-month-old baby bundled and buckled in the car seat, which we so lovingly refer to as "the bucket."  (To be clear, that term of endearment is referring to the car seat, not the baby.)

My beautiful four-year-old daughter, who is a ballerina-in-the-making, was orbiting around in quintessential fashion. My little girl was beaming the best of life as she went all about twirling and leaping while practicing her pirouettes with all the grace she could muster, all the while humming a rendition of the Shimmer & Shine theme song, her current favorite cartoon.

"Please be careful, princess," I managed to mumble out of my mouth while simultaneously trying to reshuffle and adjust my awkward load. Oh, the joys of shopping with multiples.

"Please stay close to Dad - " Before I could completely finish my parental warning, I watched in horror as my daughter spun herself directly into the pathway of an oncoming vehicle. There was nothing I could do but watch in disbelief as she was plowed over, mercilessly, by the car.

I remember looking through the windshield at the driver, hoping to somehow be able to speak into his soul in order to avoid the tragedy. The driver never received my message-filled gaze. He never saw my daughter. He was, in fact, driving with his head down. Texting? Swiping? Scrolling? That detail I'm not exactly sure of. I suppose it is inconsequential since I'm sure the outcome would have been the same regardless.

Helpless, I could see the driver coming out of his digital distraction and back to his actual senses. A look of panic and fear quickly replaced his state of shock.  Then, to my surprise, the driver pulled back and around the now still, silent body of my baby girl. My heart and mouth simultaneously dropped as I watched the car disappear.

I let out a violent scream and stumbled toward my princess, still holding tightly to the two younglings who had no idea what had just happened, but were now both now crying in response to their father's desperate cry. This is when I finally woke up.

Remember, this was all a dream: A terrible dream.

I was in a state of panic and an emotional wreck as I transferred from dream parking lot to bedroom reality. I jumped up, ran through the house to my daughter's room, and swung open the door. There was my daughter - so peacefully at rest with her mouth slightly opened, just like her mommy, when she is sleeping soundly.

I exhaled a sigh of complete relief.

I don’t think I had taken a breath until that moment.

I crawled right into bed with her - wrapping her up with my arms, pulling her as close as I could to my still shaking body. I started to cry. My little girl woke up at that point and gently touched my face with her precious little hand, "Hi Daddy. What's wrong?"

I covered her hand with my own and gave her a kiss on the forehead. "Nothing, love. Daddy just wanted to hold you. Is that okay?" "Sure Daddy," she said as she snuggled even deeper into my arms and closed her tired eyes. "Daddy loves you so much, princess.” I whispered softly.

"I love you too, Daddy," she whispered back and was soon drifting off again.

I stayed with her the rest of the night. I couldn't bring myself to leave her side.

This dream hit me hard. I think because I can see myself as both the distracted driver and the overloaded dad. The dream allowed me to not only consider the dire consequences that could very well take place, but in a certain way, I was forced to live through it.

I could never imagine driving away from such an actual situation, but neither can I imagine having to live with myself if I had to endure any aspect of the scenario that played out in my dream that night. I cannot imagine having to explain myself to the parent of the child who would have suffered such a loss because of my complete carelessness.

If you know me at all, you know that I love my beautiful wife and five children.  They are more than a part of me; they each help to define the person that I am today. You cannot know who I am if you do not know my family. I cannot imagine how I would carry on if anything like this tragedy happened, let alone if I were somehow a factor in forcing such a nightmare upon someone else.

This dream woke me to the real and irreversible consequences of my distracted driving: The fact that it took place in a parking lot of all places, especially hit home.

I’m not the kind of person who usually takes that much away from my dreams, but yeah, this one was for me.  I confess - I am guilty of distracted driving. I confess that I am less engaged and vigilant in places where I should be the most on my guard such as a parking lot or side street where little ones are more likely to be at play or running around.

I confess, I know better. I also confess, I have to do better. I have to be better. Not only for myself, but also for that sweet innocent princess-would-be-ballerina who is someone's whole world.

The author has been working as a full-time youth minister and educator for almost 20 years. Mr. Samulak frequents schools and learning centers to present his experiences, world travels and life's adventures which are reflected in his award-winning children's picture books.

Michael Samulak is a published author of two children's picture books and has close to twenty years of experience teaching, mentoring, and engaging youth both in and outside of the classroom. Mr. Samulak has been happily married to his wife Jamie for the last 16 years.  The couple have five beautiful children together and are invested and work in the Lakewood communtiy.