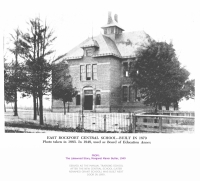 Progress can often be a double-edged sword. Whenever new structures are raised in response to changing times, the old ones being replaced face neglect, destruction –-or preservation and rehabilitation for new purposes.

As Lakewood’s school system nears completion of the most ambitious building program in its history, the community faces the question of disposing of two of its most historic but outgrown buildings. These are the red brick structures on the western block of Warren Road between Detroit Avenue and Hilliard Road, familiar to Lakewoodites as the Board of Education headquarters.

Thousands pass them daily with little idea of their role in the development of public education in Lakewood. Current plans to place the building up for sale could result in cutting the last visible links of the Lakewood Public Schools to the nineteenth century.

In 1879, the smaller of the two buildings was dedicated as East Rockport Central School. Designed by the Cleveland firm of Coburn and Barnum, it was built as a cost of $4,519 plus an extra $42 to engrave the school’s name above the central windows of the second story. It replaced a one-story building dating from the beginnings of the East Rockport school district some ten years earlier.

East Rockport became the City of Lakewood, which soon outgrew its single combined elementary and high school building. Consequently the second of the two buildings on Warren Road was built in 1899 and opened as simply the High School.

Other civic buildings moved into the neighborhood. Between the schools and Detroit Avenue appeared a police station and fire department. A larger high school, known as Wilson School, was built on the eastern side of Warren Road. The old High School then became an elementary school, still remembered by some as Grant School.

Although the police and fire departments, as well as Wilson School, all disappeared in favor of other locations, Grant School and the old East Rockport Central remained in their original location. An addition was built behind Grant School, only to disappear when a new Grant School was opened on Victoria Avenue.

That left the original Grant and East Rockport Central schools which, linked by a two-room cross over addition, have served for nearly half a century as the administrative headquarters of the Lakewood Board of Education and Recreation Department. The Board’s planned relocation from this site, however, leaves the future of its two oldest buildings in doubt.

It was the threatened destruction of Lakewood’s Oldest Stone House that led to the formation of the Lakewood Historical Society in 1952. Under the leadership of founder Margaret Manor Butler, the society headed an effort to preserve the Detroit Avenue structure by having it moved to its present location in Lakewood Park. Several decades later the society worked with the city to preserve Lakewood’s oldest wood frame building, the Nicholson House, in its original Detroit Avenue location.

Since the 1960s the urban renewal movement has prompted the rise of the historic preservation initiative.  Last year marked the fiftieth anniversary of the National Trust for Historic Preservation, established by Congress to identify structures worthy of being saved for historical or aesthetic reasons.

Urban removal and historic preservation since then frequently engage in a tug-of war that can go either way. It was won by the Christian Science Church in downtown Lakewood; it was lost by the Christian Science Church opposite Lakewood’s eastern border. It was lost by the commercial block at Highland and Detroit Avenues to a generic big-box drugstore; the Curtis Block next to the defunct Lakewood Hospital, on the other hand, has staved off destruction with its recent designation as a local historic landmark.

The future of the two old schools on Warren Road is the latest chapter in an old dilemma. Can a community adapt to changing times without sacrificing the characteristics which have made it unique?

NOTE: Much of the factual material in this article was derived from an account by Amanda Francazio in the fall 2016 newsletter of the Lakewood Historical Society.

John Vacha is a Lakewood resident, historian and author. He also serves on the Board of Trustees for the Lakewood Historical Society.