Halloween Monsters With A Message 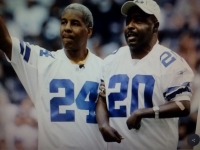 Ron Springs NFL running back with deformed hands and arms as a result of MRI gadolinium poisoning.

Halloween can be scary and so can life, particularly when you are not aware of the risks you are being exposed to. This is why Gail Montani and Mark Schulte of 13897 Edgewater Dr. decided to deliver an important medical alert with their treats for the past couple of years. 'Advocate for Awareness' Gail Montani said, “My mission is to educate the public about the risks of gadolinium-based contrast agents (dye) used to enhance MRI scans. On the top of the list of my concerns are babies, children and teens. This include kids who play sports, mothers in their first trimester ofpregnancy and the rise in painkiller/heroin use.” Current statistics show 30 million children and teens participate in sports. 3.5 million are injured each year. There is a concern for professional sports figures as well. Current statistics show the rise in painkiller/heroin use and report about 6 deaths per day in Cuyahoga County alone.

For the second straight year, the display at 13897 Edgewater in Lakewood has monsters with a message. The display has included zombies, the walking dead and a skeleton grave yard with a gravestone reading “MRI DO NOT DYE.” Many teens love the display and are really into the whole zombie theme. Some kids who came to the door were dressed as zombies as well. The message was made clear on the gravestones and were distributed with the treats to make children and their parents aware of the dangers of MRI contrast dyes and the affects of the heavy metal (Gadolinium) that is the basis of these contrast agents. There are 9 FDA approved Gadolinium-based contrast agents used in MRI/MRA and three of these agents have been in litigation for causing the most disability and death. The messages included with the Halloween treats had important information about prevention, treatment, scholarly articles and an informative website.

Gail has become a patient advocate and a voluntary Investigative Epidemiologic Data Specialist, working closely with the world experts on the effects of MRI/MRA contrast dye out of UNC (Richard Semelka MD and Michael Jay PhD). Out of a passion for helping other poisoning victims whowere never warned of the risks and have been largely ignored by the medical community, she created an organization called Learn Insights into Gadolinium Healing & Treatment (LIGHT). At Halloween this year and last, fortune cookies were handed out with the message “gadoliniumtoxicity.com”. Candy treats were also attached to information cards that listed a detailed website, an Email address, a support group for victims, a source for treatment and her mission statement which reads as follows:

It is the mission of LIGHT to raise awareness in the public and medical community regarding Gadolinium toxicity. We partner with world renowned experts to provide guidance to doctors/patients and coordinate treatment options. Some Gadolinium-based contrast agents used in MRI/MRA have been known to cause a debilitating, excruciatingly painful and disabling disease in patients with normal renal function. This disease is known as Gadolinium Deposition Disease (GDD). For symptoms and the definition of GDD Google search: “Gadolinium Deposition Disease Author: Richard D. Semelka MD November 2015”.

In the past, the dangers of MRI Gadolinium Dye has been addressed only in kidney patients. The most famous case of Gadolinium poisoning was NFL player Ronald Edward "Ron" Springs. Mr. Springs was a very well known NFL running back. He played eight seasons in the NFL, for the Dallas Cowboys from 1979 to 1984 followed by the Tampa Bay Buccaneers in 1985–1986. He was horrifically devastated by the painful side effects of Gadolinium contrast dye. As a direct result of the Gadolinium his hands became so deformed that he could not feed or take care of himself. Ron Spring's son Shawn Springs, also with the NFL, has since played a significant role in bring the deadly affects of Gadolinium to the attention of the world.

It has only been recently that studies have confirmed the serious side effects of Gadolinium contrast in patients with normal functioning kidneys. Several studies and articles have been released that reflect a much larger problem than anticipated in Gadolinium exposed patients.

Bottom-line, anyone of any age, receiving MRI contrast dye is at risk of the Gadolinium heavy metal poisoning also known as Gadolinium Deposition Disease (GDD). Most of these victims have no idea what is happening to them. Hospitals are not obligated to warn patients of the dangers.

Their doctors are not educated on the subject and patients are misdiagnosed as having fibromyalgia, arthritis, scleroderma or neuropathy. Some of the victims are babies. Gadolinium has been given to mothers during the first trimester of pregnancy and they have had stillbirths, genetically deformed babies or babies that grow up to have devastating abnormalities in childhood.

Many victims of GDD become disabled, losing their friends, their livelihood, their homes, their families and their savings searching for a cure. Some are living out of their cars. These poisoning victims are the real “walking dead.”

So how do you know you have GDD? Burning pain, usually excruciating, stiff joints and in extreme cases deformities after receiving MRI Gadolinium contrast are the most prominent symptoms. It can be confirmed by a urine test done by a Gadolinium specialist. GDD is a progressive disease.

Gadolinium poisoning alone can be fatal. Patients are usually given strong painkillers/opiates as first line of treatment. And this often leads to the downward spiral of addiction, heroin use and death. However there are more meaningful treatments that offer relief and we are working to get insurance companies to pay for these treatments. The good news is, this disease, caused by MRI Gadolinium contrast, is 100% preventable.

The treatment has been under our noses since World War II. It is the simple process of heavy metal neutralization. The Protocol for treatment is designed to literally pull heavy metal poisons out of the body and naturally excrete the poison through the urine. This process can also pull out other toxins like lead, arsenic and mercury.

Gail speaks with Gadolinium patients on a daily basis and directs them to treatment centers. If you feel that you have been sickened by Gadolinium based contrast agents used in MRI's, you may email Gail Montani at mriburning@gamil.com for information and treatment options.

Gail continues to educate the public and the medical community by handing out her calling card at public gatherings, medical workshops, symposiums and charitable patient events. She also works with national news organizations, treatment clinics and hospitals. She speaks with new patients and their families on a daily basis, offering support and directing them to life-saving treatment centers.

Two of the serious issues with the Protocol are the skyrocketing cost of treatment, since the Flint Michigan lead crisis, and that the treatment for heavy metal poisoning is not usually covered by insurance. Regarding these issues, Gail is enlisting the help of congressional representatives. Ms. Montani reported, “In addition to the lead crisis in Flint Michigan, the Protocol is an answer to lead and other heavy metal poisoning throughout our country along with providingGadolinium poisoning victims hope for a better quality of life. The Protocol focuses on well-being rather that just treating the symptoms with dangerous painkillers.”

In addition to information available through the website and the Email address, Ms. Montani and Mr. Schulte are available to speak directly to organizations about this cause and provide life saving information.

Seven years removed from her Gadolinium-enhanced MRA, Gail Montani’s life, although still hampered by disabling painful symptoms, has taken on a new meaning. “Since 2009, I have been working with other patients with properly functioning kidneys to bring evidence of Gadolinium poisoning, symptoms of Gadolinium toxicity and proper treatment of this condition to patients, doctors, researchers and scientists within the medical community.”