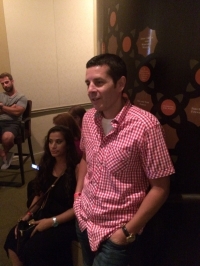 Co-headliner Dean Obeidallah giving an interview before the show.

Thousands of visitors came to Cleveland last month to be part of the Republican National Convention. Most came for serious business – whether delegates on the floor or protesters outside. However, one group came not for business, but for comedy – albeit comedy with a message.

As you are likely aware, Republican candidate Donald Trump has generated tremendous controversy in his campaign, particularly in regards to Muslims. The Arab American Institute Foundation decided rather than doing traditional programming at this year’s RNC, it would put on a comedy show. “BANNED: Dangerously Funny Arab Americans and American Muslims” was held at the Hanna Theatre in Playhouse Square. It gave delegates and other convention attendees a chance to have a good laugh during this election cycle of rising bigotry.

Headliners for the show were Maysoon Zayid and Dean Obeidallah, two successful and experienced stand-up comedians. Rising young comedian Ramy Youssef opened the briskly-paced show. The event’s comedy garnered both laughter and empathy from the audience, which packed the theater for the one-hour show. Youssef, for example, joked that his friends always ask him about events in the Middle East. His response: “Dude, I am an American. I barely know what’s going on in Cleveland.” Zayid joked that her mother-in-law is on the US Terrorist Watch List… ”I know, because I put her there!”

Obeidallah, who also hosts “The Dean Obeidallah Show” daily on Sirius XM Radio, was the final comedian on the stage. He joked about many of the stereotypes around Arab Americans, particularly those related to the current campaign. He closed his set with “after the show, all Muslims stay. We need to study for Newt’s Sharia test.” The show accomplished its goal, which was to bring a diverse audience together to share some laughter. Organizers also hope that it showed non-Arab Americans the rich heritage and tradition of comedy in their culture.

In addition to the comedy, volunteers registered new voters in the lobby before the show. They are part of “Yalla Vote”,  a grassroots voter mobilization and education program. For more information on the Arab American Institute, visit their website at www.aaiusa.org.