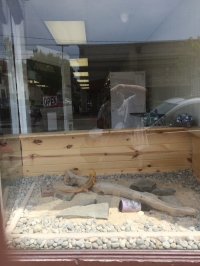 Gary the Bearded Dragon greets customers from the front window.

Some reality show personalities decide to run for President. Others decide to open a reptile store in Lakewood. Mike Easter, a regular on the Animal Planet show “Gator Boys,” falls into the latter category. Easter and his cousin Tim Connors recently opened “Scales and Tails Ohio” at 13618 Detroit Avenue. The store is a “one stop shop” to purchase pet reptiles, as well as their food and supplies.

Easter recently relocated to Ohio after spending the last 10 years working in South Florida as an animal caretaker, educator, researcher, and TV personality. His career began as a volunteer at "Everglades Outpost Wildlife Refuge," a rescue and preserve for a variety of exotic wildlife, where he gained knowledge and experience with reptiles. He went on to perform educational demonstrations in the Miami area promoting the conservation and appreciation for all reptiles. He made regular appearances on Animal Planet’s hit TV show, "Gator Boys," as well as a feature role in, "Monster Croc Invasion," a documentary following a small team of biologists researching  the American Crocodile in Costa Rica.

Connors also relocated to Ohio recently after living in Dallas, Texas. There he worked in the health care industry until deciding to come back his native state. Last winter he and Easter hatched their plan. Northeast Ohio lacked a pet store that specialized in reptiles. Easter had extensive experience with the animals, and Connors was also very familiar with them. They decided to bring a reptile store to the Cleveland area.

Despite being North Olmsted natives, the duo chose Lakewood for the location. They liked the “certain vibe that Lakewood has” says Easter. He also cited the “community feel” of Lakewood. Both Easter and Connors have strong family connections to Lakewood. Easter is the son of former Lakewood Police Officer Gary Easter. Officer Easter is well known for his long time involvement with Lakewood’s DARE program. Connors’ grandfather Jim Connors was a former Head Coach of the St. Edward basketball team.

They believe that the store is something that can benefit the area. Cleveland has a large reptile-owning community which is very diverse. “We’re trying to dismiss the stereotype associated with reptile ownership,” says Connors. Business has been steady since the store opened this spring, and growth is expected.

A very wide array of animals are available for purchase. They range from smaller creatures like tree frogs to large python snakes. The store also carries all the supplies and food necessary to take care of them. The store is also a great source for information about how to take care of pet reptiles and amphibians.

Scales and Tails also offers educational programs for schools, youth groups, birthday parties or other special events. The shows are interactive, and feature a variety of reptiles and amphibians from around the world. The program is both fun and educational, and aims to dispel popular misconceptions about reptiles.

Even if you’re just curious, don’t be shy about stopping in to look at the dozens of exotic creatures. Mike and Tim enjoy answering questions and explaining the fascinating world of our scaly neighbors. Their scaly little pals would love to see you, too...furry critters aren't the only ones that like attention. The store is open daily 12-7 p.m., Saturday 10-7 p.m., and Sunday 12-6 p.m.