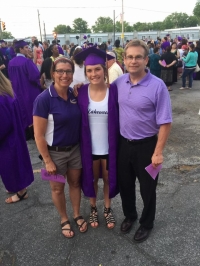 St. Edward defeated St. Ignatius 12-7 in the state championship rugby game on June 3 at Fairview Park High School. The Eagles beat the Wildcats soundly in two previous matches this season, but Ignatius entered the game as defending back-to-back state champs. The two teams battled right down to the final play, as Ed’s held off a furious Wildcat drive in stoppage time to secure the win.

St. Edward scored first, as Joe Donay powered in a tri with 23:30 left in the first half. The conversion kick failed, leaving the Eagles with a 5-0 lead. The Wildcats answered that score with 9:22 left in the first half, scoring a tri of their own. They successfully completed their conversion kick, taking a 7-5 lead. Both teams battled to a stalemate for the rest of the first half, and for the first twenty minutes of the second. Unlike the previous two meetings this season, the Wildcats kept the Eagles scorers at bay. St. Edward got a great opportunity with about ten minutes left, when a Wildcat player muffed a John Bradfield punt out of bounds deep in Ignatius territory. Jaret Williamson cashed in the opportunity with 6:55 left in the game, scoring a tri on the right side to put the Eagles up 10-7. Bradfield then made a successful conversion from 40 yards out on the right, making the score 12-7.

The teams battled through the rest of regulation, with neither squad scoring. About a minute into stoppage time, a referee whistle was mistaken by the St. Edward fans as the final.  Students jumped for joy and photographers ran out onto the field. However, the whistle was for a penalty, and Ignatius took the ball on a steady drive to within 20 yards of the Eagle goal. St. Edward was able to hold them off, and the actual final whistle blew to close the 12-7 win and spark the real celebration. This was the Eagles third rugby state championship, and the win raised their final record to 18-2.

The Ed’s/Ignatius boys game was one half of a doubleheader at Fairview High School. Their match was preceded by the girls state championship game between Lakewood and St. Joseph Academy. The Jaguars, who entered the game as the National Champions, showed everyone how they earned that crown. They beat the Rangers 54-7 to nail down the state title. This was the fourth straight Ohio championship for St. Joseph, which has six overall.

Lakewood earned a trip to the championship by defeating Hudson 41-12 in the state semifinal game the week before. That Ranger win avenged an earlier loss to Hudson, whose team was one of only two teams to beat Lakewood this year. Lakewood was aggressive in that game, jumping out to a 24-7 halftime lead to shock the Explorers.

The state title game started well for Lakewood. They kicked off to St. Joseph, which controlled the ball for the first five minutes of the game. Lakewood then gained control, and drove deep into Jaguar territory. Their possession ended just short of the goal, and the game remained scoreless through an evenly played first 15 minutes.

St. Joseph scored first, getting a tri with 15:00 left in the first half. The conversion kick failed, resulting in a 5-0 lead. Four minutes later, a Jaguar punt took a strange bounce on the artificial turf, and a St. Joseph player was able to recover and run it in for a tri. The conversion kick made it 12-0, and the Jaguars gained momentum. They added another score before the half to make it 19-0 at the break.

St. Joseph continued to wear down the Rangers in the second half, pulling away with more scores. Rose Beisel-Linn scored a tri for Lakewood with 19:15 left in the game, putting the Rangers on the board. Caitlin Zingale followed with a successful conversion kick, making the score 33-7.

After the game both teams gathered in a circle at midfield to offer thanks and congratulations. The Rangers received state runner-up medals in a postgame ceremony, capping off a winning season.

Friday, May 27 was a much anticipated day for the seniors at Lakewood High School. Their graduation ceremony was held at 7 p.m. at Lakewood Civic Auditorium, culminating their four years at the school. For one LHS senior, the day was even more special.

Senior pole vaulter Clare Toole, a district champion in her event, qualified to compete at the OHSAA regionals at Amherst Steele High School. The catch? Her event was scheduled for 4:30 p.m. on May 27, right before her graduation ceremony. So while the rest of her classmates were putting on their caps and gowns, Toole was competing for one of four spots in the state championship field. She was successful, finishing fourth and earning a trip to Columbus. It was the realization of a goal she has held since sophomore year.

After waiting about an hour to receive her medal, Clare faced a a 26.7 mile ride back to Lakewood to attend her graduation ceremony. She made it with just seconds to spare. “When I finally made it to graduation my row was about to be called so I made it right in time to walk across stage,” she recalls. There was no time to change clothes, though….so she wore her track uniform under the cap and gown. At the end of the evening, she was officially both a state qualifier and a LHS graduate. Not a bad day.

Lakewood senior pole vaulters Clare Toole and Jimmy Toner both qualified to compete at the OHSAA State Championship Finals on June 4rd at Ohio State University. Toner qualified by jumping 15'3" (a new school record) at the regional competition in Amherst. Toole also qualified at Amherst, finishing fourth in the girls competition. The duo of Toner and Toole have known each other for years. "We have been best friends since 4th grade," says Toole, "So to have this amazing opportunity for both of us to travel down to states together just makes me so happy."

Toner competed first in Columbus, as the boys competition began at noon. He finished tenth in the competition, earning a top ten finish for the second time in two years. Toole finished 12th in the girls competition, reaching a height of 11 feet. Her attempt at 11'6" was agonizingly close, but not quite enough. Toole will continue her pole vaulting career next year at the University of Akron. The pair, which have set many records at LHS, will be missed. Not only do they have great talent, but their work ethic was great motivation for the other team members.

ESPN, HOOPS, and OTHER NOTES

- ESPN will return to First Federal Lakewood Stadium on Saturday, August 27 to broadcast the St. Edward football opener against Pine-Richland High School. Pine-Richland is located in Pennsylvania, north of Pittsburgh. ESPN was most recently in Lakewood to televise St. Edward's 2014 opening football game.

- LHS boys basketball program is hosting a fundraiser on Saturday, June 11 from 6-8pm at Around the Corner. A $20 donation covers pizza, wings, and draft beverages. Funds raised will help provide camps, clinics, and shootouts for the team. Tickets will be available at the door.

- LHS construction is on schedule, which means the new gym should be open in fall 2017. The basketball teams will use Harding Middle School for one more season before returning home to Bunts Road.

- LHS was unable to field a boys rugby team this season due to the lack of a head coach. However, it hopes to be back on the field in 2017.