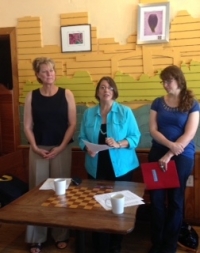 Representative Nickie J. Antonio (D-Lakewood) discusses how Ohioans would benefit from national policies that clean up industrial methane pollution for the oil and natural gas industry.

“Industrial methane pollution is a significant threat to public health and the environment,” said Rep. Nickie Antonio. “We are asking the U.S. Environmental Protection Agency to issue strong federal standards to cut methane and other harmful pollution to protect our citizens and create a stable environment.”

Methane pollution occurs as the result of leaks and venting from oil and natural gas wells, pipelines, tanks and other equipment. These leaks cost billions of dollars every year, and waste the amount of gas it takes to power nearly 6 million homes. In Ohio, emissions data suggests oil and natural gas produced in the state wasted over 7,500 metric tons of methane in 2013.

Methane pollution from oil and natural gas production is also harmful to children’s health. There are nearly 200,000 Ohio children suffering with asthma every day. Pollutants such as methane, ozone, and benzene increase the frequency and severity of their asthma attacks.

Even with these devastating effects, there are no federal standards requiring controls on industrial methane pollution in Ohio or nationally. By using proven, low-cost technologies we can eliminate as much as half of all climate-warming methane emissions. By repairing and replacing leak-prone natural gas distribution pipes, as well as continuing to develop and deploy technologies that prevent the escape of methane to the atmosphere, Ohio workers can be doing a lot to reduce emissions right here, right now. Modernizing these pipes with advanced materials that are now available would reduce leaks and create thousands of jobs, and improving upstream technologies would strengthen, not disrupt, our economy.

There are only about 25 operators who participate in voluntary programs, like the EPA’s Natural Gas Star program. If federal action is not taken, methane pollution from the industry is projected to increase around 25 percent over the next ten years. Methane and air pollution know no state boundaries. It’s time for Ohio to take the first steps in eradicating this deadly and wasteful pollution.

State Representative Nickie J. Antonio (D-Lakewood) is honored to be serving her third term in the Ohio House of Representatives, where she was elected by her collegaues as Assistant Democratic Whip for the 131st General Assembly. House District 13 includes the city of Lakewood in its entirety and parts of Cleveland’s West Side including the Detroit Shoreway (Gordon Square Arts District), the Stockyards, West Boulevard, Cuddell, the Village of Linndale, and a section of Ohio City neighborhoods. Representative Antonio is a civic minded public servant who is concerned with the quality of life of those around her and has been a social justice advocate working for human rights and equality for all people for more than two decades. Antonio began her public policy service when she was elected to Lakewood City Council in 2005 and was re-elected in 2009. During her tenure on Lakewood City Council she chaired the Economic Development, Housing, and Human Services committees and served on the Public Works and Finance Committees and was the council representative for the Lakewood Hospital Board and Community Relations Boards. She brought successful strategies for economic development through proactive policies such as the first ever sidewalk dining legislation, the results of which can be seen today in the vibrant outdoor dining scene throughout the city. Ever concerned about environmental policy and practice, Antonio also shepherded through legislation to reduce toxic emissions through a reduced idling ordinance. Antonio also exercised leadership by developing opportunities for diversity appreciation and understanding and civic engagement through the Lakewood Community Relations Advisory Commission of which she was a founder and promoted citizen human rights by expanding protections in the existing municipal intimidation laws. She also championed the push to retain funding for senior programs and services. Antonio is an alumni of the Harvard Kennedy School Senior and Executive Leadership program for State and Local governments. The first in her family to graduate from college, Antonio holds a Master of Public Administration Degree from the Maxine Levin College of Urban Affairs at Cleveland State University and a Bachelor of Science Degree in Education, also from CSU. She is a graduate of Lutheran West High School located in Rocky River, Ohio. A former Special Education teacher and non-profit Executive Director for a women’s outpatient drug/alcohol treatment program, she also served for nearly two decades as a consultant to non-profits and governmental agencies throughout Northeast Ohio and served as administrator for a multi-County HIV/AIDS regional planning group. During this same period she was an Adjunct Professor at CSU teaching courses in Women’s Studies and Public Administration policies and practice. She continues her civic involvement through membership in numerous community groups and serves in an advisory capacity for Spaces Art Gallery and on the board of the non-profit Cleveland Tenants Organization. Antonio currently serves as Ranking Member of the Health and Aging Committee. She also serves on the Finance and Appropriations Committee, Finance Subcommittee on Health and Human Services, the Joint Medicaid Oversight Committee, and the Joint Legislative Committee for Unified Long-Term Servics and Supports. Rep. Antonio is the Chair of the Ohio House Democratic Women's Caucus. Because of her social justice advocacy and activity, Antonio is known as a collaborative community builder and organizer. She is an enthusiastic proponent of the arts and civic engagement as some of the best tools available to develop local and statewide viability and economic success. She is also a certified coach and advocates the benefits to the world when people are valued and encouraged to rise to their highest potential and purpose. Daughters Ariel and Stacey, both Lakewood High School graduates, have made Rep. Antonio and partner Jean Kosmac very proud as the girls engage in their post-secondary pursuits.