A Brief History Of The Studio Glass Movement 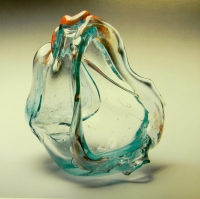 Glassmaking has been around for quite some time. Its earliest beginnings can be traced to Egypt. Blown glass vessels were developed in the Mediterranean basin about 2000 years ago. From early on, aesthetics as well as functionality played an important part in the artisan’s creations of these vessels. Roman glass clearly showed the importance of beauty in its creations. During the Renaissance, decorated glass was also of significance with Venice as the most important center for glass in the 1500s. From the many styles and techniques that became available, a demand for ornamental glass gradually spread throughout northern Europe. Glassmaking shops with several artisans were the norm for the production of small runs of blown glass.

Fast forward to the 19th century. With the development of the Industrial Revolution, the small studio shop gradually disappeared. Glassmaking moved into large industrial settings with many workers and large amounts of raw materials for production. As time progressed, it became widely assumed that glass, especially blown glass, could only be made in a factory with teams of skilled workers to produce the basic forms in large quantities. These factories were thought to assure quality. Talented designers headed firms where their designs were carried out by a team of workers. Emile Gallé and Rene Laliqué in France and Louis Comfort Tiffany in the United States are recognized as familiar names of men who headed highly successful firms during this period.

In the early 1960s, all this changed when it was discovered that glass could be melted and annealed in small, studio furnaces. The single artist or a small group could design and produce artworks without the need for a large group of workers and great quantities of materials. It was during this time that ceramics Professor Harvey Littleton from the University of Wisconsin held a glassblowing workshop in a garage on the grounds of the Toledo Museum of Art in Toledo, Ohio in March of 1962.

Littleton worked with glass research scientist Dominic Labino, Director of Research at Johns-Manville Fiberglass Corporation, who was able to perfect a small, inexpensive furnace to melt glass and work the media showing that it was not only possible but also affordable for glass artists. Harvey Leafgreen, a retired Libby glassblower, also proved essential to the workshop’s success. Although few of the participants went on to become glass artists, the results of this workshop and the second one in June of the same year proved to be successes.

This was the beginning of the Studio Glass Movement. One of those students, studio glass pioneer Marvin Lipofsky, started glass programs at the University of California at Berkeley in 1964 and at the California College of Arts and Crafts in Oakland in 1967. Another student, internationally known artist Dale Chihuly, went to study at the Rhode Island School of Design after leaving Madison. Upon graduating from RISD, he headed the glass department there from 1969 to 1980. Chihuly recalls Littleton’s influence on his career in a 1998 article on Littleton by William Warmus for GLASS Quarterly magazine: “Without a doubt Harvey Littleton was the force behind the studio glass movement; without him my career wouldn’t exist…”

Harvey Littleton’s active encouragement and promotion of studio glass made it possible for glass programs to spring up at universities, art schools and summer programs across the country during the late ‘60s and ‘70s. From the ‘70s through the ‘80s the Studio Glass movement became an international phenomenon. Those two small workshops at the Toledo Museum of Art in Toledo, Ohio 50 years ago, comprised of a small group of like-minded artists, have become an international community of thousands.

Daniel Pruitt operates the Daniel Pruitt Studios LLC in the Lakewood Screw Factory. You may visit his website at danielpruittstudio.com

I am a glass fusing artist, teacher and entrepreneur with my business located at the Lake Erie Screw Factory in Lakewood. I teach classes and workshops offered by the Cleveland Institute of Arts Continuing Education and Community Outreach Program in my Lakewood Studio. I also exhibit in local Art Festivals including Cain Park art Festival, Lakewood Fine Arts Festival, Rocky River Art Festival, Shaker Arts Festival and the Ohio Designer Craftsman Show. at the IX Center.