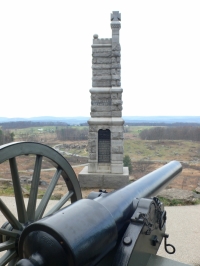 View from Little Round Top, where the South was stopped on the second day of battle. (Photo by Gary Rice)

So much has been written about the Battle of Gettysburg and its aftermath, (including President Lincoln's famous address) that, at first glance, one might wonder why we continue to be fascinated by that epic struggle. Many, if not most 8th graders in this part of the country, have visited that battlefield either on the way to, or from, their visit to Washington D.C.. Hundreds of school buses enter and exit those bus loops around the Gettysburg Visitors Center each year, giving students the opportunity to view the iconic Cyclorama painting by Philippoteaux, and to purchase different souvenirs. In all of that hustle and bustle, students could be excused for missing a few aspects concerning that sacred ground.

For sacred it is, in so many sublime ways.

As far as I have been able to determine, I may have had ancestors on both sides of that historic struggle at Gettysburg. That was because during WWII, Dad had been stationed in the South, where he met the prettiest Southern Belle that Alabama had to offer, (or at least he thought so!) and I certainly agreed with him. Mom and Dad kept on fighting the Civil War, good-naturedly, on and off for the next 59 years, but they made a really good team otherwise, and, of course, they also made me! As a "Sou-northerner", I've always been fascinated with the Civil War, and the stories behind the stories of that sublime conflict.

By the spring of 1863, Confederate General Robert E. Lee felt it necessary to bring the war to the North. There were practical, as well as strategic and tactical reasons for doing so. For one, the Confederates needed food and supplies. The Union blockade, as well as the tide of war, had extracted a severe toll on the South already, and it was becoming more and more apparent that the South would need to achieve substantial victories in order to keep its claim to legitimacy with the European powers. In January of that year, President Lincoln had issued the Emancipation Proclamation, announcing that slaves in the Confederacy were to be considered free. In March, the first Conscription Act was passed by the Federal Government, forcing men into service. The passing of that act led to huge riots and resistance, particularly in New York. By May, General Lee had won a costly victory at Chancellorsville, but by then, the South too was trying to draft men into service with equally mixed results, and in the West, the Confederate city of Vicksburg was being threatened. It was rapidly becoming apparent that the South needed to stay on the offensive and try and get the Union to come to terms, before it ended up fighting an ever-losing war of attrition.

A Confederate attack through southern Pennsylvania would appear to be an attempt to encircle Washington D.C.. With America's capital threatened, perhaps the war could be brought to a rapid conclusion with a peace treaty. Union support for the War was by no means universal either, with many "Peace Democrats" continually challenging the Republican President Lincoln at every turn.

At first, the Confederates were able to practically race through Pennsylvania before running into the Union Army at Gettysburg. After an initial skirmish inside that town, the Union Army wisely withdrew to the high ground south and east of Gettysburg, forming a fish-hook shaped defensive line. After attempting to dislodge the Union Army from either end of that fish hook during the first two days of battle, it was on the third day, when General Lee decided to order a massed infantry attack across a broad open field; an attack that opened with a fierce cannonade, and ended with the bloodied remnants of the Confederate Army retreating back across that same field- having been torn into ribbons by the victorious Union Army.

In a nutshell, that was the story of Gettysburg. The loss of life there was horrific, and with the Confederate loss of Vicksburg happening on the following day, the South's days as an independent Confederacy were numbered. The war would drag on for about two more years, but from that point on, the struggle for the South would primarily be defensive in nature, against a Union force that was growing stronger every day. The Union had the men and the factories to provide what it would take to finally subdue the South, but not before losing around three hundred thousand men in the process.

On November 19th of the same year of Gettysburg's battle, President Lincoln came to that community, along with many other dignitaries, to formally consecrate the new Gettysburg National Cemetery. The principal speaker at the event was the noted orator, Edward Everett, and he spoke for two hours. Finally it was the President's turn. Lincoln rose and spoke in his high-pitched voice for less than five minutes. Although few realized it at the time, those few minutes helped to define the purpose of the Civil War in an immortal way. Although, believe it or not, there were some vociferous journalistic critics at the time who panned Lincoln's short speech, his Gettysburg Address went down in history as being one of our nation's pivotal moments of reflection and commitment to a higher purpose.

Gettysburg's battle indeed changed the world. At that point, world leaders were able to take the measure of our young Republic, and see it for what it was, and for what it was becoming. Slavery was on its way out, and an increasingly powerful and centralized Federal Government meant that America was rapidly becoming a world-class power to be respected, and reckoned with. Advocates of states-rights would continue to advocate, but from that point on, their cause was a losing one, at least when it came to America's national vision.

Still, the powerful Federalism that developed during the Civil War did not attempt to usurp the rights of individual Americans, but instead, insisted that our national government would indeed be responsive to individual Americans through the "Rule of Law". It continues to be true, as President Lincoln so eloquently expressed, that our "government of the people, by the people, and for the people" has not perished from the earth.