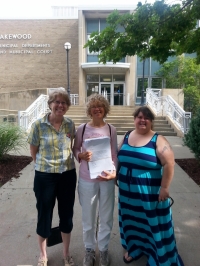 A Lakewood citizens' group marked Independence Day by completion of a petition drive that seeks to eliminate the growing influence that corporations, unions and other artificial entities have on the political process. The U.S. Supreme Court's 2010 ruling in Citizens United vs. FEC further expanded the influence of these nonhuman creations of law on our political process by extending to them the right of free speech as represented by the large amounts of money that these entities injected into our elections.

"Our initiative calls on Lakewood's elected representatives at the state and federal government levels to support an amendment to the US Constitution that restores to the people the inalienable rights guaranteed to them when our country was founded. Our initiative reverses the steady erosion of rights that belong to the people as represented most recently in the disastrous Citizen's United decision. Our initiative would legally clarify that corporations are not people and money is not speech", explained Glenn Campbell, a member of the committee of petitioners. "This will help curb the corrupting and out-of-control influence of money on our politcal process."

The citizens' committee, formed to add Lakewood to the growing list of Move to Amend communities in Northeast Ohio and approximately 500 nationwide, has completed the first phase of the citizen initiative and has submitted petitions to the Lakewood City Council Clerk for exmaination. According to the Lakewood City Charter, City Council Clerk Mary Hagan will assure that the petitions are signed by the required number of qualified electors. If the review verifies that the requirements of the Charter have been met, the citizens initiative will come before City Council.

Lakewood citizens who signed Move to Amend petitions are on the forefront of the organizing effort by the nonpartisan citizens' group that was established to promote the nationwide Move to Amend campaign among Lakewood residents. The effort began on January 19 with a public forum at Lakewood Library where citizens gathered to discuss the influence of money in politics.

Move to Amend seeks an amendment to the United States Constitution that states the following:

A)  Only human beings, not corporations, are legal persons with Constitutional rights,

"Even if you're not interested in politics, the Citizens United decision and its predecessors affect you because it is a big part of the reason Ohioans couldn't escape the political advertising during so much of the 2012 election season," said Campbell. "And if you are interested in politics, whatever your causes may be, they're increasingly lost causes unless we can roll back money's ludicrously large influence on our elections and the way we are governed. This initiative and the Move to Amend movement are an important step in that direction. Help us put Lakewood on the right side of history by calling on our state and national leaders to amend the Constitution to put the people above the corporations for a change."

I am a Lakewood resident and am interested in community activism.