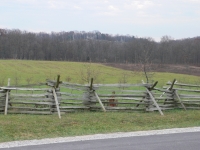 "...from these honored dead we take increased devotion to that cause for which they gave the last full measure of devotion- that we here highly resolve that these dead shall not have died in vain- that this nation, under God, shall have a new birth of freedom- and that government of the people, by the people, for the people, shall not perish from the earth."   Abraham Lincoln 1863

With these last words of Abraham Lincoln's Gettysburg address, given at the dedication of the Gettysburg National Cemetery on November 19, 1863, and only a scant four months after the bloodiest battle of the Civil War, Lincoln established a goal for a national post-war reconciliation while at the same time acknowledging that the American Civil War was not yet concluded.

Most people, including a great percentage of our nation's civilian and military leadership, had not envisioned the Civil War to last very long. At the war's first significant battle at Manassas (also called Bull Run), a fair amount of Washington D.C.'s glitterati had even come out to watch the battle with their picnics and carriages while dressed in their Sunday finery. Only when the battle had turned to favor the Confederates did their carriages (and the Union army) race back to Washington D.C. in disarray.

A great bulk of the Southern officer corps had been trained at our nation's military academy at West Point. These young cavaliers were often exceedingly bright and highly committed to their cause. They were often very daring. In contrast, for quite a while President Lincoln had a terrible time getting his Union military leadership to commit to any kind of proactive military movement against the South. When movements were finally made, they were often made with considerable caution, and with a predictability that the South could easily exploit. Though frequently outnumbered, the Southerners had the "home field" advantage, as well as the iron-clad honor-bound motivation that comes from troops defending their own homelands.

The Union troops, on the other hand, had motivations of their own, of course. They were angered beyond belief that other Americans could actually rebel and fire against their own flag. There was also the issue of slavery. Although Southerners argued that Northern factory workers were little different than slaves, the fact that those workers had the ability to leave their jobs made a big difference. If this seems a lot like economic warfare, combined with the never-ending struggle for human rights, let's face it. It was.

It was also political warfare. The Republican Party had come along just six years before Lincoln was elected in 1860. It could well be argued that the Republican Lincoln might not have been elected at all had the Democratic Party been able to offer a single candidate, but the Democrats had split into two factions. This gave Lincoln and the Republicans the chance to win, and they did so. During the Civil War, political debates about that war continued to rage between Democrats and Republicans. Ohio Representative Clement Valladigham (D), who was against the war, was tried and convicted for his remarks and even imprisoned for a time before being deported to the South where he eventually made his way to Canada. Vallandigham even attempted to run for governor of Ohio from Canada! (He lost.)

By the way, the Democrats were not the only group to split up, amoeba-like, as a direct result of issues relating to the Civil War. A number of church denominations, as well as other organizations, and even one state split up (West Virginia split from Virginia), leaving a number of groups that are still separate today.

By the time the war concluded in 1865, both sides had suffered incalculable losses. The South lay in ruins, and the North was exhausted. Lincoln was very much in favor of a conciliatory attitude towards the South, but his assassination at the hands of a Southern sympathizer meant that many years would pass before any forgiving would be done. There were even large groups of Southerners who actually left the newly re-formed United States for places like Mexico and Brazil. To this day, there remains a good-sized colony of descendants of those original Southerners in Brazil who still fly their Confederate flags at get-togethers.

It can honestly be argued that many of the issues that Americans faced in the Civil War remain with us today. Wars do indeed settle immediate questions, but all too often they raise other, more sublime issues. As we continue to revisit our American past during this 150th anniversary of our Civil War, perhaps the greatest homage that we could pay to America's war dead would be for all of us to continue to work towards conflict resolution and reconciliation in our world, as well as in our nation, and particularly...among ourselves.