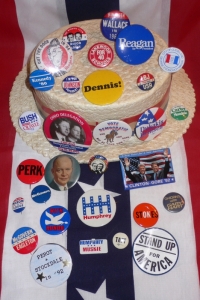 By now, you've heard the above expression more than a few times, have you not? (Although. not with MY name in that phrase, of course.) If circumstances had been a bit different, you MIGHT have heard the above expression as written, however. After I retired from the classroom in 2005, I seriously considered running for political office in Lakewood.

When I graduated from college in 1973, my degree was in Political Science. Back then, there was a feeling that change was in the air in America. The Vietnam War was winding down. Issues concerning civil rights were entering the mainstream of America, and there was a real hope in some parts of our country that things were going to get better. The 1960s taught America that everyday people did indeed have a voice in historical events, especially with the advent of evening television newscasts. The world was changing. With the resignation of President Richard Nixon in the wake of the Watergate scandal, there was a widespread feeling that common people could make a difference in our country and that, ultimately, right would indeed prevail.

Of course, that was before the gasoline and oil crisis hit the world, as well as other crises too numerous to mention here. Life's trials continued, as they always do, but at least we had the Bee Gee's (1977) "Stayin' Alive" Disco song to dance to and cheer us up. Steppenwolf's "Monster" (1969) had already replaced the Youngblood's (1967) recording of "Get Together" and then was replaced by The Who's (1971) "We Won't Get Fooled Again" (that said something about meeting the new boss, who was same as the old boss). These days, I sometimes wonder whether we shouldn't bring "Monster" back. Listen to those lyrics and see whether you agree with me.

Comparing America's political system to a huge out-of-control political monster does not require much imagination, at least to many people nowadays. The seemingly endless sums of money spent by political action groups, as well as by the two principal political parties in this country, all but insure that everyday people have to wonder just how much of a say they have anymore in the American governmental process. Still, it would be a mistake to paint that political process with too broad of a black brush. There are still everyday people who can and do make a difference in government and in life every single day. You, too, can be one of those people. All you need to do...is vote.

The phrase "All politics is local" has been attributed to former U.S. Speaker of the House Tip O'Neill, meaning that politics begins with the interests of a community. Here in Lakewood, and in other communities across America, politicians who aspire to local or regional office must demonstrate a responsiveness to their electorate. Indeed, that responsiveness can insure a long political life for that politician. There are many Americans who might not share the political viewpoints of an incumbent, but may otherwise appreciate the services provided by that politician's offices. Politics IS local, make no mistake about it, thanks to that incredible power that you have....the power of the vote.

This, of course, is a presidential election year. As usual, we are shocked (or at least pretend to be) by all the negative rhetoric from those ubiquitous campaign ads (many of which are not generated by the politicians themselves, but by those independent political action committees--PACS). Negative "politikin'" is not a new thing either. Collectors of political memorabilia can show you negative political stuff going back to the early days of our country.

The good thing about all of this, of course, is that you and I do still have our vote. Although our votes do not directly elect a president (the Electoral College does that), we do vote for the electors who will do that job. A presidential election does, at least, generate a relatively fair voter turnout. To be frank, under the Electoral College system, we can pretty accurately predict how most states will go, even before an election. There are only a handful of "swing" states that generally will decide a presidential election, and Ohio is one of those states, which is why you are presently being inundated with all of this campaign stuff. Also, quite frankly, many Americans apparently want very little to do with the political process as it is today. A presidential election brings out the most voters in our country and yet, in 2004, only about 61% of Americans who could vote did so! More than 80 million eligible American voters reportedly stayed home in the last presidential election.

It probably would be easy to not blame them for doing so either...except that when we don't vote, we give whomever does vote more power than they really should have. Voting is indeed a precious freedom and responsibility. Not to vote is to walk away from the democratic process, and give away your power and responsibility to someone else. As much money as the PACS throw at an election, as much blather as the politicians spout, they can't buy you or your vote in the privacy of the ballot box. No one knows how you vote, and no one WILL EVER know, unless you tell them!

Look, you might be a conservative, a liberal, or somewhere in between. You might not have even voted in a while. You may even be sick to your stomach with all the garbage on TV about politics these days. Still, if you do vote, IF YOU DO VOTE, you WILL be among America's elite "secret" decision makers. You will then have MORE political power in your hands than the millions of Americans who stay home and do nothing but bellyache on election day. You've heard this proverb a thousand times: "If you're not part of the solution, then you're a part of the problem." 'Nuff said.

Please vote. I'm Gary Rice, and I approve this message.