Lakewood, A Half-Century Ago... Models Of Yesteryear... 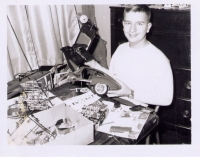 '60's Gary with model car. With this one, he even built the engine! (Photo by Robert Rice)

No Lakewood, this column will not be about those pretty lady models in those centerfold periodicals that came out back in the 1950's and '60's. (You know, the ones that teen-aged boys ogled behind the garage, supposedly safe from the prying eyes of the adult world.) Sorry, but the Lakewood Observer does not come in a plain brown wrapper. This periodical does not cater to those sorts of "observers."

Just as an aside, we kids once caught an uncle who (apparently unaware of the limitations of photography) was trying to "angle" a racy photo in order to attempt to get a peek under a bikini. Of course, that did not work out too well for his embarrassed and dirty old mind!

No, the "models" in this column are those that once consumed the interest of our young and at least semi-innocent minds well before the swim suits and bikinis attracted our attention. Our models were the trains, planes, ships and tanks that we purchased whenever we had a few extra dollars, which really wasn't that often way back when.

Model building was BIG in 1950's and '60's Lakewood. There were many aspects of that hobby, depending on one's interest. You could get into model trains, with their detailed basement or attic layouts, and you could pursue endless creative options. Back then, it was actually possible to send in box tops from your cereal and get a very detailed, build-it-yourself plastic model train.

How detailed? Well, I guess you'll just have to ask my dad. I was a bit young at the time, so the construction details for that train project fell on his shoulders. Between working all day and going to college as well, Dad was not really motivated to put together an HO gauge model train outfit, but he bravely gave it his best shot. He did a great job, but what finally got him were those micro-springs that were part of each train car's suspension system. My personal vocabulary skills expanded exponentially when I learned a few new choice words from my WWII Army veteran father as those little springs started flying across the kitchen floor while he tried to compress them into each tiny wheel assembly.

Dad also loved to build models as a kid, only in his day, many were made of steel. With his 1920's $3.00 "Spirit of St. Louis" kit, he could either construct "Lucky Lindy's" plane or any of a hundred other aircraft designs, depending on how he bolted the thing together.

I liked model planes too. One day, Dad bought me a flying plastic German Stuka dive bomber that was gasoline-powered and string-controlled. That is, I'm sure that some people could string-control fly it. I was not one of those people. After about a dozen rotations flying the plane in the Rocky River Metroparks, I got dizzy, and that expensive dive bomber did exactly what it was designed to do. I would imagine that if you were in the right field down there today, you might still be able to find some of those tiny green plastic Stuka parts embedded in that rich alluvial valley earth, but I digress.

I was not the most patient model builder either. I have to confess I had little interest in wasting time building engines for my model cars. My theory was that engines were hidden under the hood anyway, so why spend a couple of hours building a car engine that would mostly be hidden, when all you had to do was glue the hood shut? My friends thought I was out of my mind, but my cars looked as good as theirs, at least on the surface.  I tended to rush through a model, finishing it in record time. I generally just spread out the direction sheet and used it as a work area. After all, if you were halfway done building a model, and you had to flip the page over, that was not very practical if you had all your parts spread out all over those directions. Who needed to read the directions anyway? You just pulled the kit out of the bag and started gluing. Inevitably, I had plenty of parts left over (especially those engine parts!).

Painting a model made it look really good, but that took quite a bit of time, as well as patience that I so seldom practiced. When it came to painting, however, I loved to camouflage those little tanks and military vehicles. The American tanks generally did not need to be camouflaged, as they were mostly just a boring olive green. With the Soviet and German tanks, however, you could have a field day. My friends and I spent hours building and playing with Eastern Front battle layouts. We would pretend to be German tank commanders, screaming "Panzer LOS!" at the top of our squeaky pre-teen voices as we pushed those pseudo-mud-splattered Tiger tank models across the Russian steppes and re-created the Battle of Kursk. Our counterpart Soviet tank commander friends would respond in kind, as they moved their T-34 tanks in response to our attack. Our imaginations took flight in those Lakewood basements, as we spent hour after imaginative hour re-fighting WWII.

There are many positive outcomes to acquiring model building skills. Kids learned about history, fine-motor skills, the importance of follow-through and task completion, and let's not forget those skills learned through peer interaction. You might fight your buddies for two hours on those papier-mâché layouts, but you could always stop and enjoy a grilled cheese and a bottled soft drink together afterwards.

These days, you can buy so many models that are already pre-assembled, painted, and ready to display. I've never quite understood that approach. True, you get a really authentic model, but all the thinking and doing has already been done for you. There seems to be so little room for creativity and imagination anymore. Kids nowadays have their so-called "fun" battling on the tube with those video games, often without having anyone else around to play with them. So often, too, the only options for them are to be  virtually killed or to virtually kill. The virtual blood spurts virtually everywhere on those realistic little screens. So little seems to be left to the imagination in the present day...even with those racy magazines...or so I've been told.