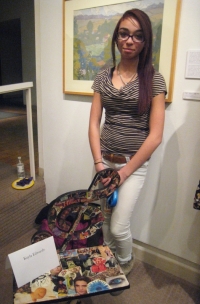 It’s not often you see 70 high school sophomores beaming with pride over an English class project. However, at the Beck Center for the Arts on Feb. 6, you couldn’t miss the smiles on the faces of the students in Sean Wheeler’s American Literature class as they proudly displayed the results of their project: handmade chairs or WikiSeats.

The students in Lakewood High School’s 2.0 program were at the Beck to exhibit their work from “The WikiSeat Project.” The project required the students to design and build a chair by hand. The unique learning experience called for students to engage in ideas surrounding design concepts, the experiential learning cycle, and the works of Ralph Waldo Emerson. The LHS students are the first high school in the country to tackle the project.

Nicolas Weidinger, a designer and professor at Ohio State University and creator of the WikiSeat concept, described the project in this way:

“A WikiSeat is a three legged stool that is built by hand. Each WikiSeat starts with a “Catalyst” that acts as a central support structure. The creator of a WikiSeat has the freedom to gather materials and find their own methods for building the seat.”

The “Catalyst” is a small metal support structure made of angle iron that is constructed in such a way as to form a three-legged chair. Each student was given a “Catalyst” at the start of the project and instructed to design a chair using the “Catalyst.”  Class time was spent on considerations of form/function, the design process, and readings on the nature of learning and self-determination as outlined by Ralph Waldo Emerson in his essays, “The American Scholar” and “Self-Reliance.”

The results of the quarter-long project were chairs that reflect the unique sensibilities and interests of each of the students. The styles ranged from sleek to frilly to spartan. One was built with an old film reel as its back, another a skateboard. And even if a chair didn’t quite make it, such as one student’s project which she dubbed “Epic Fail,” the process and critical thinking used to get qualifies as a success.

“(In this project) the students are doing instead of getting, making instead of regurgitating, and engaged rather than being passive participants in their learning,” said Wheeler. He told the audience of friends and family gathered at the Beck that he wanted to show his students that they can be problem-solvers. He wanted them to see how they would develop the confidence as the project progressed to finish the job and do something they never thought possible.

Although many of the students said the prospect of building a chair by hand “freaked them out” at first and seemed like an insurmountable job at the start, by the end they were thrilled with what they had created.

Eleven of the chairs remain on display in the front window of the Beck Center through the end of the month for those who would like to check out the students’ amazing creativity.

Lakewood High’s 2.0 program is a pilot project of 9th and 10th graders in core subjects focusing on project-based, real-world learning that uses technology to not only connect students with other learners around the world, but to help collaborate and share their work with each other.