Rediscovering The Art Of The Printing Press 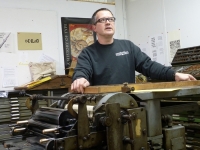 I remember walking into my second-grade classroom the day after Open House, ready for a morning as usual, and discovering a prim island of flat plastic shapes arranged in the center of my desk. Curious and impulsive, I asked out loud, as I pushed the blocks around, what is this for? A little full of myself, and definitely impatient, I must have assumed that someone had forgotten to clean up the mess he left on my workspace, and I’d already smeared the pieces out of order when I got my answer. The night before, the parents of my classmates had picked an image to assemble on their child’s desk using sets of colored tiles. My mom and dad had followed the pattern on their chosen card, leaving me their picture to find as I settled into my seat the next day, and I-- in my haste and hurried presumptuousness-- had wrecked their work with a single swipe.

That story squirmed into the front of my mind as I watched Michael Gill set moveable type into a printing press at Cleveland’s Zygote Press last week. The concentration with which he nudged each tiny letter into place hinted at the precision necessary to mint a good page; after inking the rollers and running a practice sheet through the machine, the importance of the minutia was obvious. Two of the letters in the words meant for his book’s cover were off just-so from the rest of their lines, and so Gill fished for an “l" and an “o” in a similar font with the proper alignment in the drawers of alphabets lining the walls. Replacing the errant type yielded the print that he was looking for, and then-- after measuring for placement-- he was able to run paper through the press, inking the final copies of the cover for Common Household Rhymes for the Modern Child.

The time it took to complete just the set up for this relatively simple step took the better part of an hour; Common Household Rhymes binds not only words, however, but beautiful wood-block print illustrations. Each picture is several layers of ink; Gill carved a separate woodblock for every color he used. “Once it’s carved and ready to go, each block took maybe an hour and a half to set up on the press, register, and print. There are 6 and 7 blocks in some of the pictures.” Every illustration corresponds to a different poem, all of which were written in “pretty close relationship to my life,” says Gill. A clever rhyme illustrated by an equally clever-looking cat warming itself (one sly eye open to meet the reader’s) in the sun recalls an old pet, and later tales of campfires, night bike rides, and minor messes all hail from home. “As a family [we’ve] spent a lot of time around fires, talking and doing what people do around the fire, typically long after the kids go to bed. I do have an exceedingly cluttered workbench…and of course, the bicycle.”

Remarkably, Gill only became acquainted with a letterpress during early 2009. His history, however, is full of proof of his creative spirit-- years spent writing professionally followed years of studying literature and creative writing. While his focus in graduate school was poetry, making a living as a journalist meant that the rhymes and chapbooks he created in his twenties were archived, his time necessarily directed towards reporting and editing. Lately, however, as his young family grows, Gill has found an outlet once again for his verse: “about 6 years ago, when I began to have the time and energy for writing for writing's sake, what came out were stories and rhymes for my kids.” Common Household Rhymes is a collection of some of those stories, and because “stories for kids need pictures,” Gill learned the art of relief printing.

Having worked in print media for so long, Gill had to adapt to the pacing of self-printing his book of rhymes. While “there is a rush of satisfaction upon completing a cover story for a newspaper,” he allows, “those cover stories usually start and end in a matter of a couple of months. In the case of shorter features, the work is done in less than a week.”  Gill’s book, as much visual art as a work of poetry, took 3 years to build. “Coming to the end of the whole thing is a whole different layer.” Marking the end of this project-- and the first time Common Household Rhymes meets a large audience-- is an art opening, hosted by William Busta Gallery on Friday, December 2, from 6 p.m. to 9 p.m.

Michael Gill printed one hundred copies of Common Household Rhymes for the Modern Child. With that kind of an investment at stake, the care --and frustration-- involved in the project’s creation demand an incredible amount of energy and patience. Recalling the tears of that morning in second grade, when I realized I’d wrecked my parents’ thoughtful-- albeit simple-- pictorial “hello,” I wondered what happens when something goes wrong with a woodblock. “You have to keep it in perspective,” says Gill. “Each little piece of the project is just that: one little piece. So if you’re in the middle of a job totaling more than 80 woodblocks and you get to one that doesn’t work, that’s just one little episode in a much larger story.” The story starts in pieces: pages drying on a dainty wooden rack, stacks of woodblocks waiting to make a mark-- but paging through the finished book as Mike curated type in the press, I got a sense of that whole-story perspective, and my attention focused on the tiny sound of leaden words coming together, letter by letter.

Michael Gill lives with his wife and two children in Lakewood. He directs his imaginative energy into art and writing, the most recent culmination of which-- “Common Household Rhymes for the Modern Child”-- is available for sale, along with several single prints and copies of earlier chapbooks, at the William Busta Gallery (2731 Prospect Avenue) on Friday, December 2, from 6 till 9 p.m.