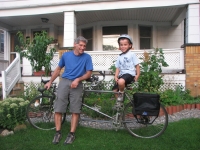 The idea of cycling as a functional and sustainable way of transportation is one that is slowly growing every day in communities like Lakewood. The more people who get on a bike on any given day, the bigger the idea grows, and I can start to see a future where the cyclists dominate the road, and motor vehicle travel becomes that of only absolute necessity. So how do we get more people on bikes? I try to convert people on a daily basis, but there is another whole population of people who can be building the cycling culture up very effectively for the future, and that is families like the Querys.

Everett and Judy Query have three children, Lene, Paul, and Tad, all of whom learned to ride a bike at the age of four, through a wonderfully unique system that Everett devised. He was able to have one of his tandem bikes modified to fit the much-shorter legs of a child, so that they would develop the feel of being on a bicycle before getting on one by themselves. In addition to that balance training, the Query kids also experienced road cycling and learned bike safety at a very young age, all while spending memorable quality time with their dad.

The cycling bug began with Everett and his two brothers when Everett was in his early 20s. Their interest began through garbage-picking bikes and modifying them in a variety of ways, and expanding on that interest as the years passed. Everett's brother, Ray, is an impressive figure in the local cycling world, boasting trips from Ohio to Central and South America, and being essentially car-less for many years (more on Ray to come in another issue!).

Everett now has an eclectic collection of bikes, including two tandems, two road bikes, a mountain bike, and a Bike-E, a style of recumbent (which will soon be modified to read “Bike-Ev”). His favorite bike is a Batavis Competition he bought in 1985 and has since continuously improved over the years, adding new components to keep it riding smooth and fast. Everett himself has done some impressive riding, with a peak day-ride of 125 miles, and an 850-mile trip through the lower peninsula of Michigan under his belt.

One of Everett’s favorite cycling memories was a trip to Alabama, when his oldest child, Lene, was only a year and a half old. He and his wife Judy rode their tandem bike, with Lene in a bike seat, through the breathtaking scenery of the south. Everett’s face still lights up at the mention of that memory, the feeling of sharing such an invigorating and wonderful experience with the people he loves.

Tad, being the youngest of the three kids, is now six years old and already has two years of riding under his belt. His older brother Paul also spends much of his time riding, mostly on a BMX bike. Incredibly, Tad and his siblings essentially never used training wheels as a part of their learning process, which Everett attributes to those early tandem rides. Tad is also following in his dad’s footsteps in the way of bike collecting, already the proud owner of two bikes. When asked how he feels about bikes, Tad says, “I don’t like biking as much as Uncle Ray!”, but I have a feeling we’ll be seeing Tad cycling for many years to come.

Everett’s concerns about biking are mainly about driver education, with a desire to build more patience and understanding on the part of drivers. As previously stated, I think Everett is doing a major service by exposing his kids to the cycling lifestyle at a young age. The more people who do this for their children, the fewer people we will see in cars in the future. Everett finished our discussion with the simple and beautiful statement, “Bikes are wonderful...everyone should ride.”

I am a 26-year-old woman who drinks coffee and beer, rides some bikes, reads, takes pictures, makes stuff, and runs long distances.