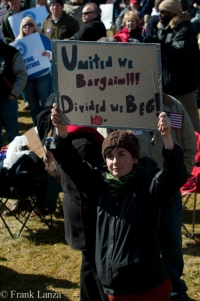 I am a retired letter carrier with the U.S. postal service and a proud member of the National Association of Letter Carriers. I am against Senate Bill 5 (SB5) and I support my fellow public workers and Lakewood neighbors who are being attacked and blamed for the state’s 8 billion dollar budget shortfall. This bill aims to severely restrict unions' ability to negotiate fair wages, benefits, and workplace conditions under the false premise that it’s THEIR fault we are broke and that SB5 will balance the budget. SB5 will not achieve a balanced budget and makes it a union/public worker versus taxpayer argument that is untrue and dangerous.

For these reasons, I found myself on a bus to Columbus last Tuesday, March 1, joining 20,000 other union and non-union workers alike, on the statehouse lawn demanding that the senate “Kill the bill.” Besides teachers, firefighters and policemen, there were autoworkers, steel workers, carpenters, electricians, wastewater and sewage treatment workers, farmers, ministers and students. In other words, the people whose work makes this country tick.

There were many speeches, but I was particularly struck by two who spoke-- one was a sewage treatment worker from Dayton, and the other a corrections officer from the Toledo area. The corrections officer explained that before collective bargaining, they asked and begged for body armor to do their job safely, but to no avail. They got collective bargaining and they got their body armor. It took collective bargaining to finally achieve this. They both spoke about how deeply they regretted voting Republican in last November’s election, and how they never believed THEIR working conditions and wages would be threatened, and finally, how they would work like hell in the next election, to make sure Republican candidates are defeated. There is nothing like the anger of a betrayed voter.

Lakewood is fortunate to have State Senator Michael Skindell and State Rep Nickie Antonio to represent us. They have been strong voices against SB5. At Thursday night’s Democratic club meeting, Rep Antonio stated that SB 5 is an attack on the middle class and that stopping the passage of SB 5 is about, “standing up for good jobs and strong communities.”  Michael Skindell explained that while Ohio is the seventh largest state in the country, we have the smallest number of pubic employees of all 50 states! He went on to explain that in 2008 the collective bargaining units for state workers made 250 million dollars in concessions to help balance the state budget. This included wage freezes, unpaid furlough days, and making additional employee contributions to health care. And finally, Senator Skindell noted, that between 2000 and 2009, teachers in Ohio on the average took a 3.8 percent pay cut.

Our public employees have sacrificed already. How about Ohio’s top income earners? Where have they sacrificed? In fact they have received hefty tax cuts. This, in large part explains how we arrived at our current budget deficit.

Unions, through the collective bargaining process, are the mechanism in our civilized society that set the standard for what a good paying job with benefits looks like. Attack our ability to negotiate for a fair share of what our hard work has generated, and everyone loses—including businesses. If the standard drops for what a living wage job pays, there is less disposable income to spend. Let us be students of history. The unions and its leaders were the first group Hitler went for.  He wanted the power of their organized group out of the way first.

It was the union movement that won the work standard of an 8-hour day, and a 40-hour work week. The union movement won paid sick leave, paid vacation leave, pensions and our beloved weekend, among other things. Those among us who may not have all these benefits yet, know that these are the standard benefits to strive for.

So, Lakewood, don’t let anyone talk you into a public/union workers versus taxpayer argument, remember, union members are taxpayers as well. The higher the wage, the higher the tax payment, which pays for our schools, libraries, safety forces and clean streets. Isn’t this what makes our community great? The higher the wage, the more disposable income there is to spend at our find Lakewood food establishments, stores, florists and cycle shops. Don’t let the middle class, which keeps our city strong and healthy, get attacked. Join the movement to stop SB5. Contact the Cleveland AFLCIO Federation of Labor at www.clevelandaflcio.org or 216-881-7200.