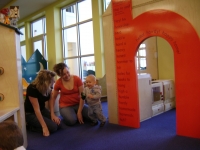 At a critical time and place in Lakewood's history, the nationally renowned designer of cutting-edge pre-literacy learning tools, Burgeon Group, has delivered big on a promise to advance early childhood cognitive, social and linguistic development with the recent unveiling of the Lakewood Public Library’s Librainium for reading readiness.

Intended primarily to teach, through play the six principles of pre-literacy, Burgeon Group’s work goes further, transmitting and evoking these experiential lessons through a rich, soulful set of symbols, shapes, textures, facts, images and language, which all are organically related to Lakewood’s local culture, civic life, natural and built geography. As a visionary cadre of former library administrators, artists and teachers, the Burgeon Group aspires to the librarian’s highest calling: the creation of knowledge. In opening the book of pre-literate childhood development through the unique language of the Lakewood community, they have created, in effect, a record of community self-knowledge made marvelously accessible to our city’s youngest residents. And the verdict is in, as two youngsters wrote on the Librainium chalkboard: “Lakewood Public Library Rules!”

Approaching either the main or branch library installation, it’s hard to miss the prominence of a diverse collection of bird houses and other colorful artwork along the skyline, high above the interactive components of each Librainium. The bird houses serve multiple purposes. From a distance, they catch your eye, aspiring to peak your curiosity and draw you and your child to interact with the learning center. At closer look, they’re adorned in different images, words and colors. Lakewood’s time-honored City of Homes theme is expressed through the architectural styles of some of the bird houses, suggesting and even mimicking notable landmarks within our city. One house mimics the tutor style and is wrapped in Shakespeare quotes. Another replicates the Oldest Stone House, while others resemble some of Lakewood’s turn of the century, Lake and Edgewater Avenue apartments.

The community lexicon doesn’t end with bird houses. In fact, the Burgeon Group strives to hide nuanced articulations of the Lakewood code that children might unpack for years after the initial opening of the Librainium has passed. Of the less hidden Lakewood knowledge, you’ll discover the wordy wrapping of a community newspaper lining the inside of reading nooks and decorating the outside of a large wooden boat. Canned vegetables bearing the LEAF Community name and mission statement are employed to spark conversation about food and nutrition. Images of the Gold Coast and other aspects of our urban architecture are also integrated into the design. Kim van der Veen challenges Lakewoodites to discover other hidden treasures within the Librainium.

Through locally grounded images, symbols and language, within an experiential, hands-on environment, playful conversational and tactile sparks can ignite the connection between community knowledge and a child’s immense capacity to learn and process new information through literacy.

Kim van der Veen and her team from Phoenix fell in love with Lakewood, its community institutions, arts and cultural life, collective communication channels and rich urban and architectural histories. These impressions inspired Burgeon’s artists to integrate Lakewood’s community practice and civic language within the Librainium. “We were very impressed by the sense of community in Lakewood,” says van der Veen. Not only does the Librainium reflect Lakewood’s deep sense of community and civic pride, by way of its participatory nature the platform itself engenders new relationships among Lakewood’s youngest residents, parents and neighbors.

Children’s and Youth Department manager Andrew Harrant has witnessed the birth of new friendships between both parents and children within the space. In one instance, two mothers became acquainted with a third through shared interaction, between each other and their children. The two mothers invited the third to join them with child at Kaufman Park that afternoon. “It’s instant community!” Harrant exclaims with a deep sense of appreciation for the Librainium’s impact at such a grass roots, interpersonal level.

The bonding extends deeper, into the realm of early childhood development, and further, in the way that a library’s broad access to pre-literacy learning opportunities raises the bar for the academic and civic accomplishments of future generations. “Early literacy plays a key role in enabling the kind of early learning experiences that research shows are linked with academic achievement, reduced grade retention, higher graduation rates and enhanced productivity in adult life,” according to Dorothy Strickland and Shannon Riley-Ayers.

There are Six Principles of Pre-Literacy (http://www.opl.on.ca/ECR2R.php):

Phonological Awareness Being able to hear and play with the smaller sounds in words.

Vocabulary Knowing the names of things.

Strong correlations exist between literacy and an individual’s capacity to think abstractly and critically. While more abstract, intellectual modes of cognition are the stuff of late adolescence and adulthood, it is clear that building the foundations for a critically sensible civic discourse begin with the teaching of the six pre-literacy skills.

Through playing with each other, reading, conversing and generally experiencing the Librainium, children are pulled into the learning experience, developing synaptic connections which will underpin future cognitive, social and emotional development. And they’re leaning because they’re playing. This is accomplished by molding a learning environment that is “visually interesting but not over stimulating,” according to van der Veen.

Lakewood's youngest residents first embarked on the Librainium experience with the opening of a small scale organic learning center at the Madison branch library in late April. The branch Librainium was an instant success. “I'm thrilled to see the children and parents interacting with the puppets and the Librainium,” said Judy Grzybowski, Madison Branch Manager. On any given day, and especially between children's programs, the Madison Branch Librainium magnetizes the children's area. Toddlers engulf the interactive learning center in a playful swarm, curiously exploring the ABC Ball Pull and the Dancing People. The branch installation includes a sitting space, which draws children into reading and interaction with the built-in learning tools.

“Not only is the Librainium a work of art, there are a lot of great display items for parents and children to look at and interact with. Most of the art is totally interactive with kids, and everything has a learning purpose. There are a lot of things that deal with motor skills and brain development,” said Harrant, who is especially appreciative of the way that constructive play time with the Librainium will advance timely neurological development for Lakewood’s youngest residents. Simple repetitive actions like “getting kids to move their hands in circles strengthens neuron flows across the brain’s synapses,” explains Harant. “Every point of the space is intended to develop early literacy skills and general brain development. But the kids don’t know it, because they’re having fun.”

“For all of our installations across the country, we try to integrate seating, interactive learning panels, and cozy reading nooks to encourage parent-child interaction around the six pre-literacy skills,” says van der Veen.

Harrant is equally impressed by the way in which the Librainium seems to encourage reading both within the library and beyond. Throughout the Librainium there are many shelves situated within a child’s sightline and grasp for displaying books. At any given time, there are nearly fifty pictures books on display at the Main Library Librainium. “We have to refresh the books four to five times a day. Children will play, then read a book, play and the read some more.” There’s also a toy book drop which helps to encourage responsible patron habits at an early age, and the children derive great joy from this, too.

Indeed, the children are learning, and deeply, in the Librainiums at Main Library and Madison Branch. And they don’t even realize it.

By providing such a locally unique experience of the six pre-literacy skills in Lakewood, the Burgeon Group has opened the door for our city’s youngest residents to one day realize their higher potentials in community, thus increasing the odds that Lakewood’s long standing tradition of community pride and civic know-how extend well into the 21st century.