Our first issue from 15 years ago, and today's 388th Issue. This issue looks at today, but we also go back 50 years ago with talk and memories of the BIG STORM, July 4th, 1969. Not only do we have Gary Rice's memories, but Susan Schwartz, sister of Greta Schwartz, who was killed that day, stops by and shares what the anniversary means to her. We also drop award-winning Scott MacGregor, Gary Dumm and Greg Budgett's classic Illustration of the story, only 12 years later it is colorized.

You can download the issue at the bottom of this page.

Thank you to everyone in the City of Lakewood for your participation for the last fifteen years! Fifteen!

Back in 2004, to celebrate Independence Day, we launched the print edition of the Lakewood Observer. It was our gift to the City of Lakewood.
At the time, the Lakewood Public Library, Lakewood Public Schools, City Hall, Non-Profits, the Arts and everyday residents had a hard time getting their information out to all.

A group of us got together to first address some of the hatred on social media. At the time there was only one small BBS using fake names, but the hate and the lies flew and made issues unto themselves.

We dedicated ourselves to allowing anyone in to share stories, photos, poems, illustrations, cartoons anything and everything. Post it, send it in, put your real name on it, and we will help you get it out to the public. Of course, the other part of our deal is, we will also help anyone else that has information or knowledge on a subject to join in and potentially disagree.

At the time, no Facebook, no Twitter, no Instagram, SnapChat, or a hundred other apps and websites. There was not the massive diffusion of conversation that arrived with Facebook, where any yahoo can declare a page, and set about running it like their magical kingdom

We sat down and created a vehicle to keep serious discussion going over days, weeks, months, even years. It was called the “Thought Puddle.” Today it is the Lakewood Observer Observation Deck, a place that tracks Lakewood through photos, music, and adult discussion about serious topics ranging from Development, City Hall oversight, Crime, Schools, Taxes, Sewers, Arts, National News, Sports and everything and anything. Many discussions filled with hundreds of images and videos stretching back over 15 years!

We are looking forward to good times ahead. We have great commitment from advertisers for a fall and winter of parties, contests and more. We would also like to thank our loyal advertisers who understand that they support an entire community when they advertise with us, and encourage our readers to support them.

We have more “retired” “real” reporters joining the project like Eric Sandy, Erin O’Brien and others.

And we look forward to the residents of Lakewood continuing to step up and share their stories and information with the rest of the community through the Lakewood Observer. In Print, Online and here 24/7/365 for you, ready to get your information out. (Go to the Member Center at http://www.lakewoodobserver.com-- it’s easy.) 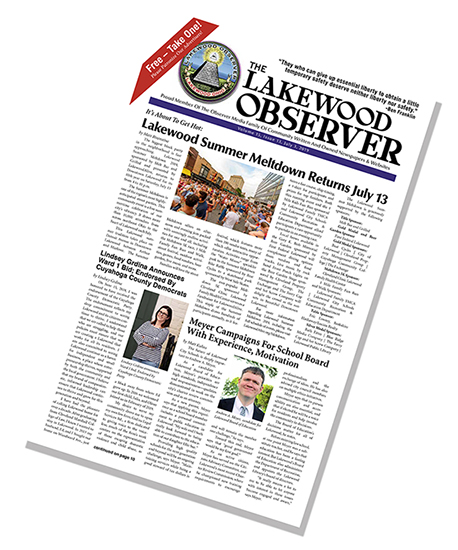 Pick it up at over 100 locations around Lakewood, or

Good Friends in Lakewood Land, a wee bit more of a remembrance and reflection here...

And yes, to you too, little sister Susan.

Thanks for your own remembrance, and kind words in the Lakewood Observer.

Thanks too Jim, for putting together such a fine issue, this week particularly. The causes of Tradition and Tomorrow were both well served.

Susan, your big sister Greta was one of the most beautiful people Lakewood ever knew. Her engaging smile, willingness to listen, fine musical ability, and interest in everything that was interesting in life, made her a friend to everyone whom she encountered.

Perhaps the most noticeable of of her many exceptional virtues, were her constant smiles and loving kindnesses expressed to others. For me personally, living with my speech, hearing, and other physical challenges, she was one who looked beyond those conditions and accepted me for who I was, in an era when many others did not. She met every challenge in her life without complaint.

All who knew her were deeply impressed by the exceptional person she was.

You get to know someone very well if you are in band together, and particularly if you share the same section in a band, as Greta and I did. In sun, rain, mud, or dust, we all prevailed together to put on a good show every Friday night while always keeping our "white buck" shoes spotless. A good band functions like a well-oiled machine, and as a critical cog in that machine, the drumline is the heart of a band. The Lakewood Ranger Marching Band, under the superb leadership of Director Richard Strang and other exceptional directors before and since, was simply the best of the best. Friendships formed in that band, even a half century ago, remain strong today. On September 27th, the Ranger Alumni Band will march again at the stadium with the present band, keeping those ties of past and present strong...

See, there's another aspect to all of this. There's that so-called "Early Settler" planting those seeds over the entrance to the Civic. Sure, you and I and Greta and even its creator Viktor reportedly knew that terra cotta form represented Johnny Appleseed, who, among his other occupations, was also a Swedenborgian missionary. Lakewood's nervous movers and shakers back then wanted the sculpture to simply represent something a bit more generic, but we all knew who it represented, and most of all, we all well knew the significance of planting seeds.

The banjo player, Pete Seeger, often sang a song about that old Bible parable concerning seeds. Remember? When the sower cast those seeds out, some fell on pathways and were stepped on. Some fell on the stones and did not grow, but some seeds fell on the good earth, grew, and multiplied many times over...Remember?

Greta was good too, even at her age, with planting good seeds.

See, she’d wanted to give her life to teaching. Her passing helped me to decide that I needed to do the same thing.

I ended up teaching school for over 30 years, and every single day, she was teaching right along side of me.

but again, I digress here...