They moved to Westlake, near Crocker Park, under the new name Arashi Sushi.

Does this have anything to do with the plans for renovating the plaza and (gulp) having Quaker Steak and Lube move in? I recall in the years leading up to the Lakewood Town Center development lots of businesses vacated their storefronts.

that is very sad.

Hopefully a Bob Evans or Bob Big Boy can move back in.

"assume we have a can opener" - Ravi Batra

The first time we lived in Tucson was 1995 and we loved having the Big Boy there. We tried Sakura twice but, IMHO, even though it was fun it always seemed just a bit more expensive than it should have been.

You know it is funny s I read your posts it took me back to an article I wrote for the Euclid
Observer as an outside that comes to visit. When AGS was doing the groundwork on the Euclid
Observer, I ran across a real Arthur Treacher's that was authentic right down to the menu and
the hush-puppies and malt vinegar. My wife and I stopped in and order what we had ordered
decades earlier and were instantly taken back to the 80s. 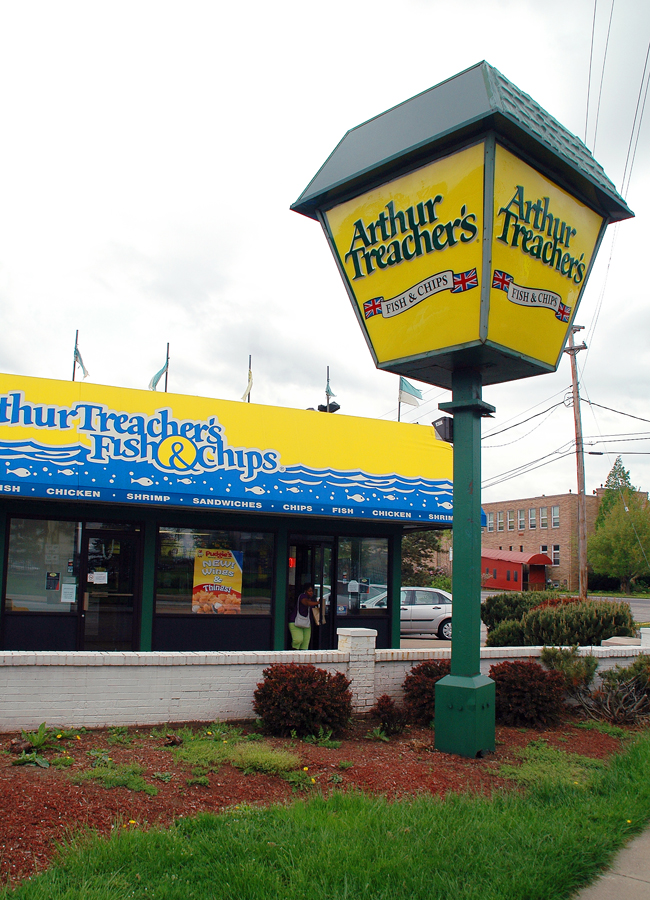 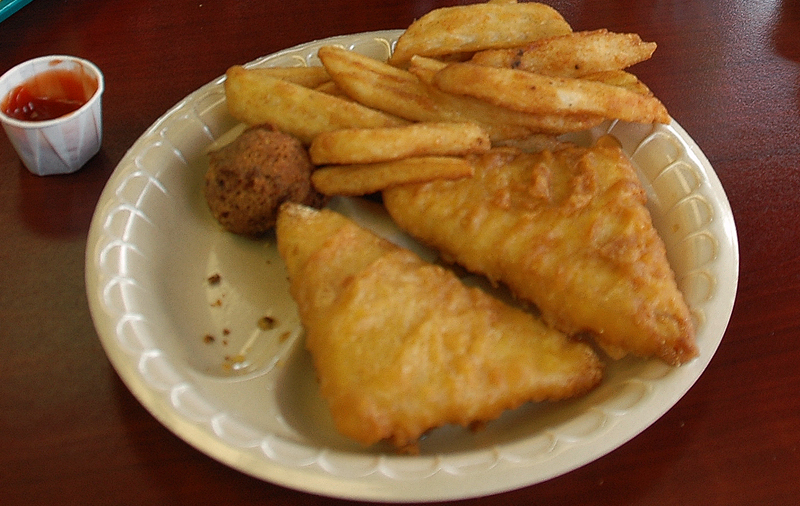 Now, by the end of the meal we certainly realized why we would not be back everyday, but
we did throw it into a classification we have of once a year. While we were there it seemed
to be a nice mix of daily eaters, and others like us that were reliving the past. Still if you
get a couple hundred thousand in a county that yearn for the past, that come by twice a
year, that might not be a bad base to work from.

So maybe a Bob's Big Boy like the one that had been there for years in not a horrible idea,
I know of many people that stop in Bob's Big Boy on Brookpark everytime they are in town
and rave about the Big Boy, the secret sauce, and the special salt. We just took the Baily
Building back to what some remember it as, maybe it is time for Big Boy, or Arthur Treachers and judging from this sign... 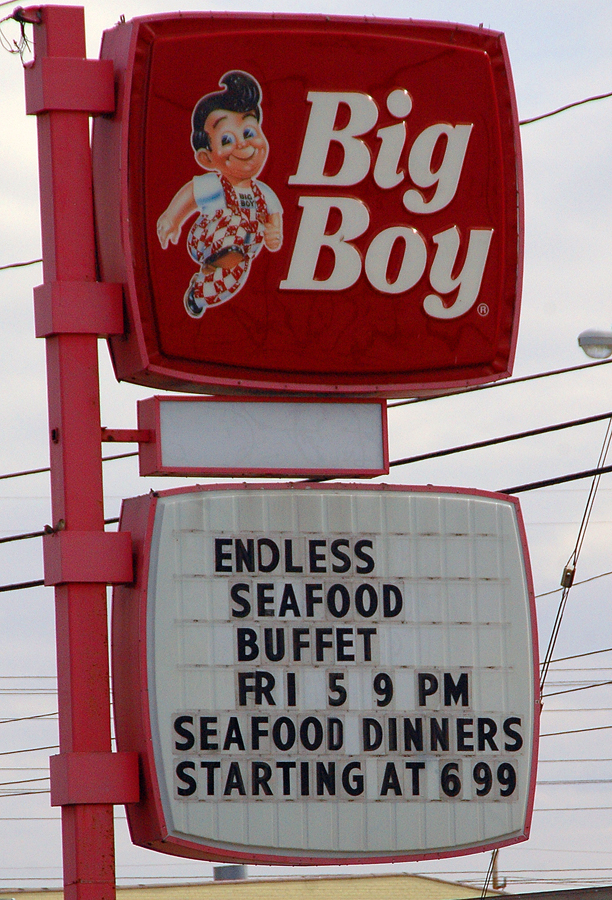 There might not be as big of a falloff from losing the best Sushi place in Lakewood,
if we could get a Big Boy there!

This Arthur Treacher's on Lake Shore Blvd. was a favorite of my grandfather's. I remember living in Atlanta in the 70's as a wee lad and gramp's giving me an official Arthur Treacher's T-shirt he "won" my being a frequent customer at the very restaurant you pictured.

Thanks for the picture.

Oh for shame on me. I just noticed a Freudian slip in my post. I mentioned the first time we lived in "Tucson" when I meant "Lakewood". We lived in Lakewood for a year and then moved to Tucson for a bit (and bounced around some more) and then settled back in Lakewood.

That said, I agree that a Big Boy would be just what the doctor ordered. Or a Bob Evans or something similar. The IHOP never caught on, IMHO, because it wasn't quite the experience (and prices were a bit high) that one was looking for in dining.

I think Cozumel seems to be doing well and hit a good niche. Big Boy could do the same without cannibalizing other restaurant sales.

It is difficult to place sushi as a full-sized "restaurant" in most of America.

The Sushi place on Ontario downtown is decent enough. It has a few tables. It closes at 6, but so does most of that area.

"assume we have a can opener" - Ravi Batra

A sushi bar housed in a Bob's Big Boy would nicely serve the eclectic mix that is Lakewood.

Heard rumor that Sakura was pushed out and that Kauffmann Park is once again on the chopping block traded for green space Detroit adjacent. Any truth to this?

I do hope that they were not pushed out because of any redevelopment. My family loved going to Sakura, although I will admit we rarely went more than once a year.

I think a Big Boy's restaurant would be nice in the space, certainly better than another fast food burger joint. Plus I have fond memories of Big Boy's as my first job was as a server at the Big Boy's in Port Clinton.

Kate McCarthy wrote:A sushi bar housed in a Bob's Big Boy would nicely serve the eclectic mix that is Lakewood.

Heard rumor that Sakura was pushed out and that Kauffmann Park is once again on the chopping block traded for green space Detroit adjacent. Any truth to this?

Kate
Excellent idea! Love it! Maybe call iti "Big Lei's"
Or maybe we could get them to serve some of their food uncooked, like the "Cannibal Burgers"
that used to be the rage in Chicago?

Just the other day Nate Kelly was quoted as saying the city is looking at improvements to Kaufman
Park, and that it would stay. Of course Nate and that administration are gone, and Lakewood does
have a couple parks that are about the size of picnic table. hmmmmmmmmmm

Danielle
WOW, I have been to that Big Boy more than once many years ago!

Kate McCarthy wrote:Heard rumor that Sakura was pushed out and that Kauffmann Park is once again on the chopping block traded for green space Detroit adjacent. Any truth to this?

One of the best ideas I've heard in a while is to use the Drug Mart Plaza space as the site for a new elementary school. The deal would include Kaufman Park and the tennis courts and the church. The City would trade Kaufman for Grant and the Board of Education Building.

I see these advantages:

Opens up a large area behind Marcs Plaza for development (although I hope the City shows more sense than it did when it traded land for promises that were never kept for Marcs Plaza).

The loss of the retail center at the Drug Mart plaza site will create demand for a new plaza which might mean development of the vacant auto dealerships and vacant grocery store at Bunts and Detroit. The hard part will be to get something that preserves the residential nature of Bunts and Parkwood. Maybe its a bridge to far. That area might be better suited to live/work space.

This might be the time to take another look at expanding Rockport. As always the obstacle will be carpet bagging property owners who let their property rot and block development unless they get 10 times the appraised value.

Riddle: How many property tax payments can you miss before you receive a foreclosure notice from the County?

Users browsing this forum: No registered users and 5 guests