This record, dated December 2, 2015, is additional evidence that there were secret meetings where the 2015 Council agreed upon a “Communications Strategy” to roll out the Master Agreement in violation of Open Meetings Laws.

It also suggests that O’Leary supplied false and misleading testimony on December 21, 2015 in the Skindell v Madigan case when he claimed he was first told about the December 7, 2015 press conference on Sunday December 6, 2015. In a previous post, I posted the "Communications Strategy" document dated November 30, 2015 setting forth the December 7th presser.

There is a CANCER on the Council President. He should resign.

Butler was a proactive accomplice in Court on December 21, 2015 as attorney of record in Skindell v. Madigan claiming there were no violations of Open Meetings Laws when he (and Thompson Hine lawyers) participated in those unlawful meetings and likely orchestrated them. 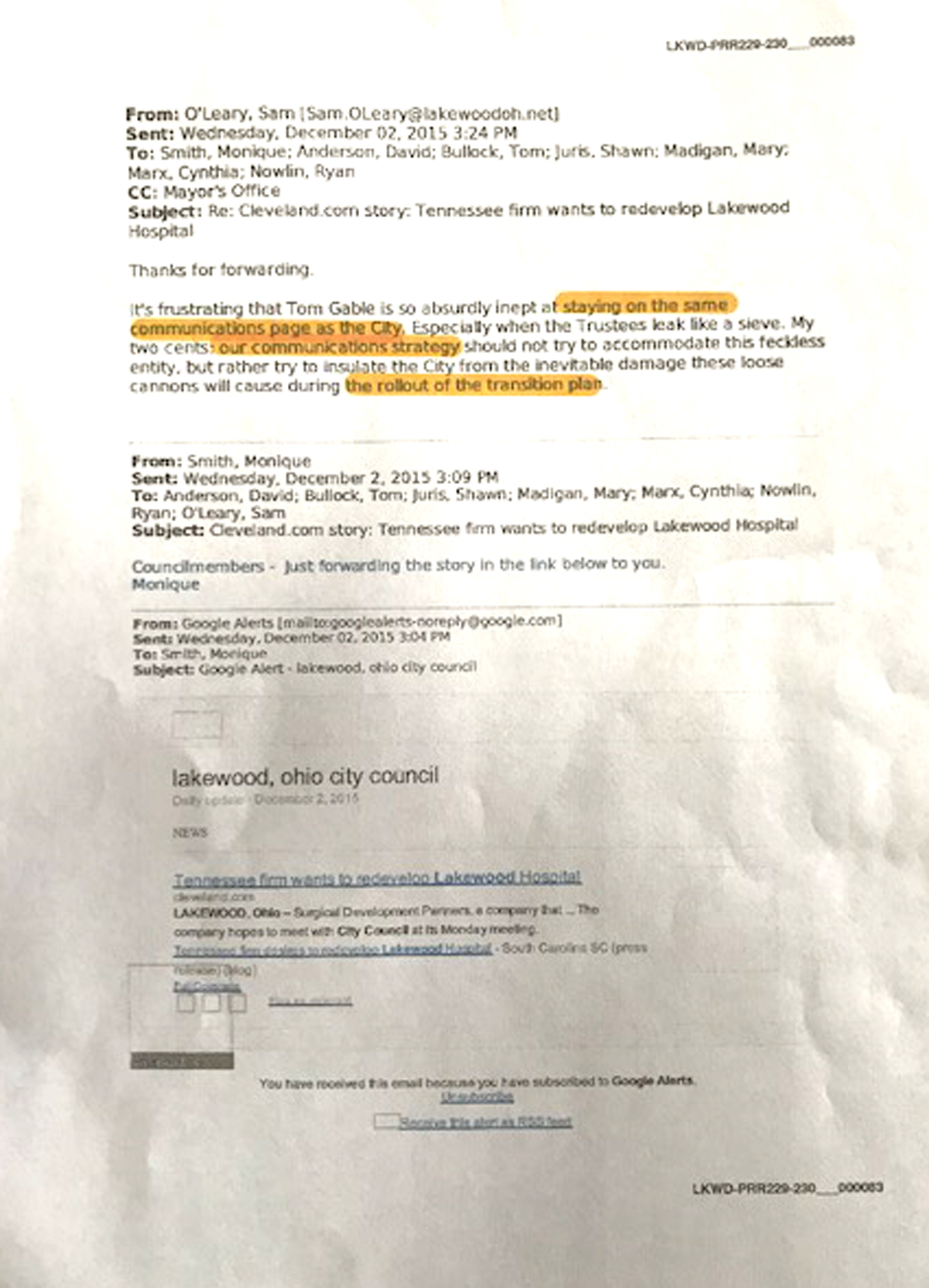 This Public Record was concealed for over a year and only produced last week on August 16, 2017, five months after a Court Order.

There appears to be a growing cancer at City Hall.

"people are going to start perjuring themselves..."

It appears that O'Leary may be only the first to give false testimony. 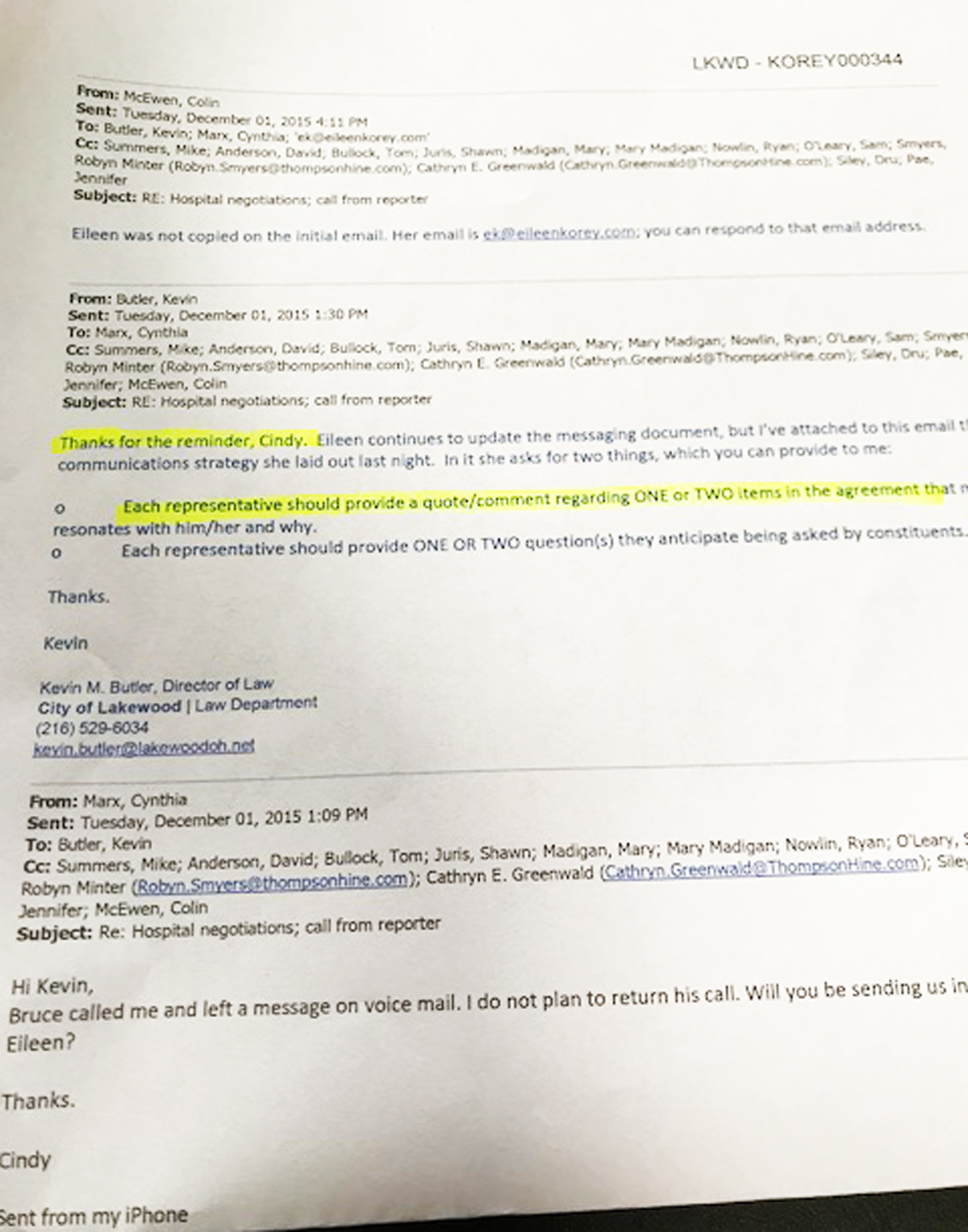 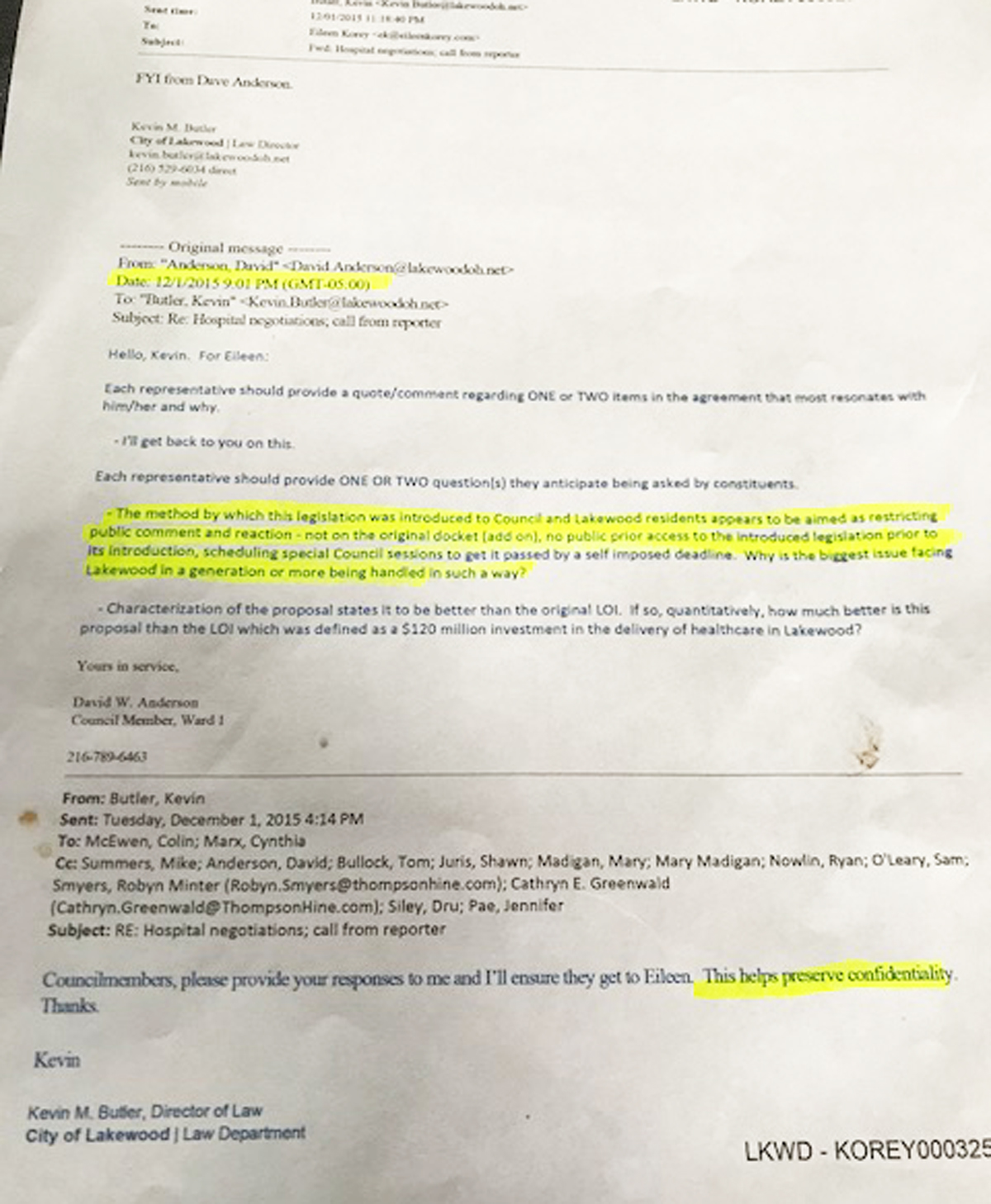 It's like reading delicious gossip from a bunch of backstabbers.

"feckless entity" < stealing for future use

It is truly ironic that in his email above, O'Leary is upset at CCF's Tom Gable for failing to stay of the same "communications page" as the City. In other words, per O'Leary's testimony under oath, O'Leary was making representations to the public that "negotiations were ongoing" with CCF and LHA, while he was part of a secret coordinated "communications" plan with CCF and LHA to "roll out" the "transition plan" i.e. Master Agreement that he claimed (under oath) was not completed.

Even more ironic is that fact that at the time O'Leary wrote that email, Tom Gable as Toby Cosgrove's sock puppet had threatened Council and O'Leary that if they did not pass the Master Agreement by New Year's Day, CCF would have LHA file for bankruptcy. Never mind that fact that LHA has $80M in liquid assets and no debt and did not qualify for bankruptcy protection.

So, contrary to O'Leary's assertion as to Gable's ineptness and LHA's fecklessness, Gable ran right over O'Leary & Co on every intellectual level...and Gable is as dumb as a pile of bricks.

There is no denying that it was O'Leary and Council who were 'inept" and "feckless."

"Inept"--having or showing no skill; clumsy.

Are there documents or other evidentiary sources to establish that Lakewood public officials (council-members) were advised by LHA or its board members that LHA would file for bankruptcy if city council did not vote in favor of the Master Agreement?

The issue regarding LHA filing bankruptcy if City Hall did not accept the Master Agreement seems to border on blackmail.

One name that keeps appearing over and over again is Monique Smith. I recall Mrs. Smith being in most of the executive sessions and private meetings. If the time comes, it may be wise to depose her, as it would be interesting to hear her "spill her guts".

Perhaps that is why Mrs. Smith moved out of Lakewood with great haste recently, much like Ms. Korey.

Of course, Mr. Litten also seems to be escaping scrutiny in all of this for some reason. Perhaps he too would like to "spill his guts" as well and tell us what really happened. Right here, right now, on the Deck. He was an LHA member for several years, and now sits on our council.

Mark Kindt wrote:Are there documents or other evidentiary sources to establish that Lakewood public officials (council-members) were advised by LHA or its board members that LHA would file for bankruptcy if city council did not vote in favor of the Master Agreement?

The short answer to your question is: Yes.

Below are some documents that suggest that Council was given an ultimatum and which also support the most direct evidence of the threat by Tom Gable that comes from a confidential source.

As folks read these statements, keep in mind that the city admits that LHA’s purported intention to file for bankruptcy was discussed in executive session--it was kept from the public until very late in the process—presumably to create a false sense of “urgency.”

Also keep in mind that Summers, Bullock and Madigan "were" LHA---Whatever Lakewood decided, LHA would have to follow them--So, feckless O'Leary had it all backward. Summers ran over the intellectually and morally weak O'Leary et al.

On December 21, 2015, Attorneys Kevin Butler and Robert Cahill both signed a pleading in Skindell v. Madigan in which they made following claims:

“Finally, it cannot be overlooked that City Council considered in executive session the distinct possibility that its tenant at Lakewood Hospital, LHA, which was approaching insolvency, could soon file for bankruptcy protection in the event the City would have failed to permit a modification of LHA’s obligations to run an inpatient hospital.” Defendants’ Brief n Opposition to Plaintiff Skindell’s Motion For Temporary Restraining Order and Preliminary Injunction at page 10.

“LHA must in the very near future cease operation of Lakewood Hospital or it will be forced to seek other recourse, including the very real possibility of declaring bankruptcy. Any sort of delay in putting the proposed master agreement into effect, should City Council vote to approve Ordinance 49-15, would likely result in LHA ceasing operations of its own volition and seeking bankruptcy protection.” Brief at p. 15

II. Cahill/O’Leary Representations to the Court

Also, from the transcript of the hearing of Skindell v Madigan, Attorney Cahill (with Butler at his side) made the following claims to the Court:

“The city of Lakewood, Cleveland Clinic are aware from representations going back months now that a bankruptcy filing could be imminent if a deal cannot be reached timely, and the winding down of Lakewood Hospital can begin to stop that bleeding. Should there be any delay in finality of a decision on plaintiff's challenge, there is a very real threat that Lakewood Hospital Association will in fact file for bankruptcy likely killing this deal in its entirety, and instead of a brand new facility, medical facility with an emergency room, the city of Lakewood is facing an empty shell, a building at which nothing is happening and no funds to do anything with it.” TR. Page 7-8

In his letter placed on the city website and published in the Observer on September 4, 2015, Butler wrote the following scenario:

Note that Butler’s claim is a cunard, because LHA would have to return all of its assets to the City, including the $50M portfolio held at LHA and the $30M LHF portfolio. Ironically, Lakewood will receive less than $20M under the Master Agreement, so bankruptcy would have been preferable for the city.

In No. 128 of your March 15, 2016 public records request, you ask for “All records, notes, and communications – electronic or otherwise – relating to any representation by the LHA, or any representative of the LHA, regarding bankruptcy.”

My email to you of April 4, 2016, at 8:59 p.m. should be fully responsive to this request.  Nevertheless, I’m obligated to remind you that because it seeks information “relating to” another thing, your request is vague, overly broad and/or ambiguous, and is therefore, to that extent, denied.  The Ohio Supreme Court has held that a public records request must describe the records desired with reasonable and sufficient clarity and not be overly broad and ambiguous. State ex rel. Morgan v. New Lexington, 112 Ohio St.3d 33, 2006-Ohio-6365, ¶29, quoting State ex rel. Fant v. Tober, 68 Ohio St.3d 117 (1993). Furthermore, a governmental office has no duty to “seek out and retrieve those records which would contain the information of interest to the requester.” Fant, 1993 Ohio App. LEXIS 2591 at *4 (8th Dist. Apr. 28, 1993); aff’d 68 Ohio St.3d 117 (1993). Finally, a public office is under no obligation to search for records containing selected information. State ex rel. Thomas v. Ohio State University, 71 Ohio St.3d 245 (1994).


LKWD—PRR132-00079: On Dec 31, 2015, at 7:32 AM, O'Leary, Sam <Sam.OLeary@lakewoodoh.net> wrote:
Ms. Bradley,
Thanks for reaching out on this important issue.
I voted to support a new health care future for Lakewood because the current hospital
could not be sustained, and there was no other alternative that was viable or prudent.
It was clear that LHA (the entity to whom the City of Lakewood leases the hospital)
would file for bankruptcy this month or next, unless there was a clear path forward
toward a different outcome

LKWD-PRR132_00335 From: Sam O'Leary [s.t.oleary@gmail.com]
Sent: Monday, December 07, 2015 1:00 PM
To: April Stoltz
CC: sam.oleary@lakewoodoh.net
Subject: Re: LHA Again Slams The Door To New Offer/City Council Mtg/Let's Jam!
April,
As I mentioned when we had tea the other night, it is simply too late. LHA would file for
bankruptcy before such a deal could be completed.

Thank you Mr. Essi for this update.

This seems to indicate that some LHA board members. who likely knew that they had already (improperly) rejected a proposal from Metro Health System to lease, operate and invest in the continuing operations of Lakewood Hospital, then pressured members of city-council with claims that LHA would have to file bankruptcy if the Master Agreement wasn't approved. Wow!

Users browsing this forum: No registered users and 1 guest